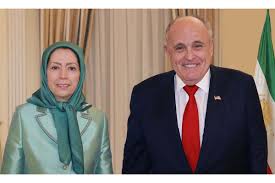 Despite having a woman leader,  Maryam Rajavi,  and despite its claim to support women’s rights and labor rights,  the MEK is a militarist and deeply hierarchical organization/cult that has nothing to offer the Iranian masses but warmongering propaganda.   It stands for US military intervention and undemocratic values.

After February 1979, when the regime of Mohammad Reza Shah Pahlavi collapsed in the face of the Iranian revolution,   and Ayatollah Khomeini took over,  the Iranian revolution  was defeated by the new regime. The revolution was for freedom, independence and social justice. The new regime however, proved to be much more despotic and reactionary than the Shah’s regime.   Despite its anti-imperialist rhetoric and populist policies,  It was  an enemy of workers and toilers.

Soon after the 1979 revolution, the new capitalist Islamic state hired more interrogators, prison guards, spies, and criminals  to suffocate the revolution. There were several major organizations that had fought heroically against the Shah and had hundreds of thousands of supporters and followers. The two major organizations were MEK (Mojahedin-e Khalq or those who fight in a holy war for the people) and Fadaiyan-e Khalq (Those who sacrifice themselves for the people). These two organizations were targets of Khomeini’s thugs.

MEK is an Islamic organization which was founded in 1965 by M.Hanif Nejad , Saeed Mohsen and Asghar Badizadegan. They split from reformist Freedom Movement (Bazargan) and reached  the conclusion that armed struggle was the only way to overthrow the imperialist-dependent Shah’s regime . Although MEK was an Islamic organization, they were under the  influence of Maoism and Focoist theories of guerrilla warfare from Latin America.

According to Ahmad Rezaee, one of the MEK leaders who led the organization after the founders were arrested:   A Mojahed (MEK member) needs only 2 books : Mao’s Red Book and Imam Ali’s Nahj al Balagha .  For this view of “socialism”, the  Shah labelled   MEK as  “Islamic Marxists” .

Before 1979 when the movement against the Shah was growing,  most of the  MEK’s original members who had survived the Shah regime’s executions,  were in prison.  A group of the members came to the conclusion that they could no longer combine Islam and Marxism and claimed that they had chosen Marxism.     However,  Masoud Rajavi  who was among those original MEK members imprisoned by the Shah  claimed that his organization still believed in Islam, and that those who had changed their ideology had no right to claim this organization as their own.

Although Rajavi and the MEK supported  Ayatollah Khomeini  before and immediately after the overthrow of the Shah,  once the MEK boycotted the  December 1979 constitutional referendum,  Khomeini  banned them from running for office in the new government.  Subsequently,  Rajavi organized thousands of motivated young people against the new despotic regime.  Thugs hired by Khomeini’s  regime started attacking the MEK and Marxist groups and organizations on a daily basis. In the period of 1979 -1981 MEK could be classified as revolutionary democrats since they were against imperialism and for radical economic change and pluralism .  During this time MEK had a good relationship with the Left in Iran.

By July 29, 1981,  Rajavi and impeached president Banisadr fled Iran for Paris where they collaborated to set up the National Council of Resistance in October 1981.  Bani-Sadr soon parted ways with MEK however.

In 1983, MEK under Rajavi’s leadership sided with Iraq’s brutal dictator, Saddam Hussein in the war which Saddam had launched against Iran in September 1980.  Rajavi moved to Iraq in 1986 and set up a base for the MEK on the Iranian border.

MEK which sent many of its members to Iraq to fight on the side of Saddam Hussein, continued  to shift to the right.   At the same time,   in 1988,  after Khomeini accepted the ceasefire with Iraq ,  the Iranian regime executed thousands of its members who had languished in prison in Iran since full-blown counter-revolution had begun in 1981.   This  mass execution of political prisoners also included many revolutionary communists and even reformists.

After the  U.S. invasion of Iraq and fall of Saddam in 2003,  Rajavi disappeared, but many MEK members  continued to live in Camp Ashraf and later U.S. Camp Liberty  in Iraq and were also occasionally brutally  attacked by the militias of the Iranian regime.   By 2017, those MEK members who had survived in Iraq were sent to Albania with the help of United States.   Many also live in France where the MEK’s headquarters are located.

Once an anti-imperialist organization,  MEK has for many years used the help of the most reactionary politicians across the globe.   From Republican John McCain to  Rudy Giuliani and John Bolton to Saudi sheiks.  For MEK, the ends justify  the means.  For them the goal of overthrowing the  Islamic Republic is so  important that any  method of getting there  is acceptable.

Despite having a woman leader,  Maryam Rajavi (Masud Rajavi’s wife),  and despite its claim to support women’s rights and labor rights,  the MEK is a militarist and deeply hierarchical organization/cult that has nothing to offer the Iranian masses but warmongering propaganda.   It stands for US military intervention and undemocratic values.   During the recent MEK conference in Paris which was attended by  a large group of U.S. Republican leaders and a few U.S. Democratic party representatives,   Maryam Rajavi  said that in her opinion, the best solution for Iran is the same as  Iraq  2003, when the  US  got rid of Saddam  for the Iraqi people.

Imperialist military intervention and economic sanctions will not bring happiness to the  Iranian people.  The people of Afghanistan and  Iraq did not see happiness after their regimes were replaced by a new one brought by U.S. invasion.  Civil war will bring poverty and misery for the people.  The Islamic Republic  should be overthrown by the Iranian people.

The wave of demonstrations is growing in Iran. People are sick and tired of discrimination, unemployment, inflation, lack of freedom of expression and ruthless policies against women and minorities, and followers of other religions besides 12 imam Shiites. People are becoming  more courageous, confronting the police and  Mullahs.   The Iranian people are not in favor of any government faction. They want to overthrow the Islamic regime and establish a  people’s democracy.

Originally published by Alliance of Middle Eastern Socialists on July 16, 2016