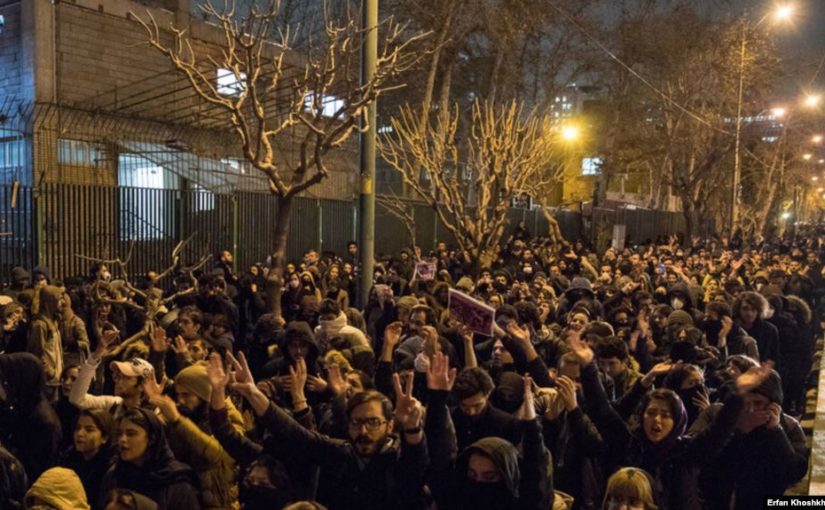 The eloquent statements and  slogans voiced by the latest wave of mass protests in Iran seem to indicate that the uprising has entered a new stage.  The efforts of the regime to derail the protests after the U.S. assassination of Qassem Soleimani and to give the impression that the Iranian masses were on its side have proved to be wrong.  While this regime still does have support from perhaps a quarter of the adult population,  the majority are clearly opposed to it and want to see it overthrown.

On Saturday January 11,  after three days of denial by the Iranian government about its January 8 downing of a Ukrainian plane over Tehran,  a representative of the Islamic Republic’s armed forces admitted that an Iranian missiles had struck the plane by mistake.  This  had occurred hours after Iran’s  missile attacks on U.S. bases in Iraq which were meant to be acts of retaliation against the January 3  U.S. assassination of General Qassem Soleimani,  commander of the Quds Force of the Islamic Revolutionary Guard Corps  and Abu Mahdi al-Muhandis , top Iraqi militia commander/founder of Kata’ib Hezbollah militia.

Iran had warned the Iraqi government in advance of the location of its  January 7 retaliatory strikes on U.S. bases and had thus allowed the U.S. to prevent  casualties.  However,   Iran had not shut down commercial  air traffic  during and after the retaliation strikes and apparently mistook the Ukrainian plane for an incoming U.S. missile.   Many of the Ukrainian plane’s 176 passengers were  Iranians with dual citizenship, including graduate students,  who had been visiting family during the Winter holiday and were returning to Canada and Britain.   They also included other Canadian,  Ukrainian, British and Swedish citizens.   There were also 9 crew members.

At first the Iranian government denied all claims that its missile had struck the plane.  It also threatened Iranian reporters who were investigating this case.  However, after incontrovertible evidence was provided by Ukrainian, Canadian and U.S. sources,  Iran was forced to admit the truth.

The announcement made by an IRGC leader on Saturday January 11,  immediately led to large and angry protests by university students in Tehran and in other cities.  The demonstrators expressed their solidarity with the mourning families of the  innocent passengers and crew killed in the plane,  exposed the government’s forty-year history of  lies/deception,  tore images of Soleimani and  called  for an end to the Islamic Republic and the  Islamic Revolutionary Guard Corps.    Despite the bullets and tear gas attacks of the security forces, and many arrests,   demonstrators issued a  call for a Sunday evening protest around the country, to oppose the regime,  and to defend women’s rights, labor rights and environmental protection.    Many   gathered at Tehran’s “freedom square”  and  in other cities such as Mashhad,  Isfahan, Sanandaj, Shiraz, Babol, Hamedan, Orumiyeh, and Rasht, Yazd, Semnan, Gorgan, Arak, Zanjan, Abadan, Ahvaz. In several locations state banners with Soleimani’s image on them were torn,  broken and removed by the protesters.

The slogans included the following:   “Dictator, IRGC, You are our ISIS”,  “The enemy is at home.”  “ We didn’t suffer casualties in order to praise the murderous leader”,   “Unworthy IRGC is a source of shame for our country”,   “IRGC commits murders and the leader supports it”,  “death to the dictator”,   “We were the victims of your ‘harsh revenge’ “,  “Soleimani is a murderer,  His leader is corrupt”,  “Death to the oppressor,  whether king or the Great Leader”,  “Neither the rule of the religious guardian,  nor the rule of the monarch”  “Death to the rule of the religious guardian that is responsible for years of murders”,   “The commander in chief needs to resign”,  “1500 were killed in November”,  “Referendum, Referendum”, “We are our own saviors”, “bread, jobs, freedom, worker council management”.

The Association of Iranian Retirees’ statement spoke out against how “human lives are sacrificed for the political goas and deals of ruling systems”.

Many artists cancelled plans to attend the annual Fajr film and music festival which has been organized by the state for the past 40 years on the anniversary of the 1979 Iranian Revolution.  One actor wrote that there is no interest in participating in a state-sponsored festival .  Another wrote that the scenes of the protests in the streets of Iran are more powerful than any theater performance.

A statement from the students at Amir Kabir Polytechnic University in Tehran  stated the following:

“Today,  we are surrounded by ‘evil’ from every quarter.  While the government’s economic policies and political suppression have brought the people to the end of their tether,  the shadow of war has also appeared above our heads.  In the midst of constant threats by military powers,  today what is lacking in Iran’s political climate is the people’s voice.  Above and beyond anything else,  the people demand freedom and equality,  and they raised their voices in the loudest form in the month of November to bring their message to others.”

“The events of the past two months have been a clear testimony to the complete incompetence of the regime ruling over Iran,  a regime whose only answer to every crisis is to resort to force.    It is our duty today to direct all our efforts at the totality of the system of suppression,  whether in the form of an oppressive government or an imperialist power. “

“During the past few years,  America’s presence in the Middle East has produced nothing but increasing insecurity and chaos.  Our approach towards that aggressive power is quite clear.  However,  it is also clear to us that America’s adventurism in the region should not be used as an excuse for domestic suppression.”

“The only way to escape the current crisis is to return to a policy based on people’s democratic rights,  a policy that will not rush into the arms of imperialism due to its fear of despotism,  and one that in the name of resistance and fighting against imperialism will not legitimize despotism.  Yes,  the only way to reject and escape the current situation is to equally reject both despotism and imperialism.”    (https://fjahanpour181258126.wordpress.com/2020/01/12/the-statement-issued-by-the-students-demonstrating-in-amir-kabir-university-in-iran/)

This eloquent statement and the slogans voiced by the latest wave of mass protests in Iran seem to indicate that the uprising has entered a new stage.  The efforts of the regime to derail the protests after the U.S. assassination of Qassem Soleimani and to give the impression that the Iranian masses were on its side have proved to be wrong.  While this regime still does have support from perhaps a quarter of the adult population,  the majority are clearly opposed to it and want to see it overthrown.

What the statements and slogans by the latest wave of protests also reveal is that the effort to challenge both the Islamic Republic and the monarchists,  and the determination to oppose both U.S. imperialism and the Iranian regime’s authoritarianism and regional imperialism are strong.

If the current wave of the Iranian uprising continues, deepens and receives support from progressive forces internationally,  it has the potential to become another social revolution.    It also needs to actively reach out to progressive and revolutionary Iraqi, Lebanese and Syrian  protesters who oppose authoritarianism, sectarianism and imperialism,  including the regional imperialism of the Iranian regime in Syria,  Iraq and Lebanon.

It is extremely important for the new wave of anti-war protests in the West not to limit themselves to opposing the Trump administrations acts of war or seek to legitimize the Iranian government in any way.   We need to listen to what the current wave of the popular uprisings in Iran and the region are demanding and not become apologists for the Iranian government in the name of opposing U.S. imperialism.

In the words of an Iranian socialist feminist:  “For the dictatorial Iranian regime,  which deals in  death,  human lives are worthless and only valuable for making profit.  But this time,  the Iranian people will not be silent and will go as far as overthrowing this regime.”

Also see January 3 statement of the Alliance of MENA Socialists on the U.S.- Iran War