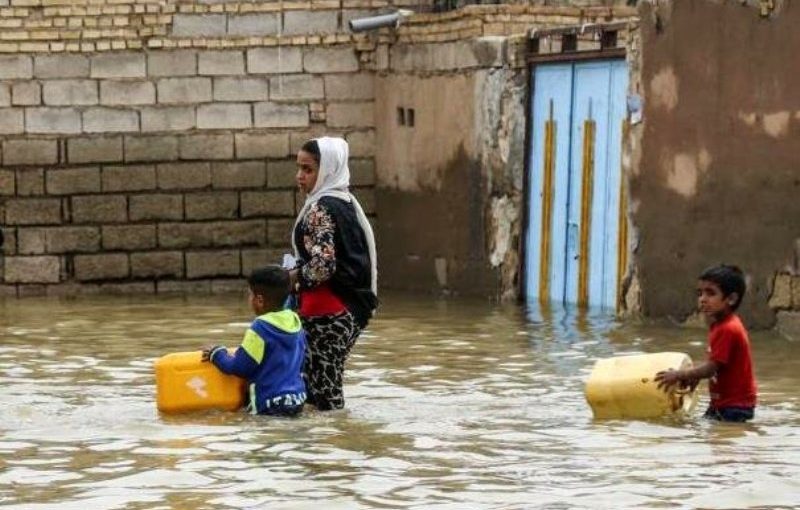 In this article,  I would like to examine the causes and catastrophic consequences of the current  floods in Iran.   This is a disaster brought about not simply by natural causes and mismanagement  but by the logic of capital in a repressive regime.

For the past two weeks, most provinces in Iran have been suffering from widespread floods which have destroyed and often submerged homes, buildings, roads, agricultural land. According to official government estimates, 269  cities and 5148 villages have been damaged.  Some villages have been completely ruined.      At least 70 people have been killed .  In the province of Khuzestan alone, more than 400,000 have become homeless.

Large portions of the agricultural food supply and livestock have been destroyed.   Drinking water supplies have been contaminated by overflowing sewage.    Contagious diseases are on the rise.  The sinking ground could collapse in some areas of Tehran.

Most affected have been Golestan province  by the Caspian sea in the north, Luristan province  in the south,  and  Khuzestan province by the Gulf in the south where heavy rains continue.   The latter is an oil producing and industrial province which has been the site of most  protests, especially labor protests since the December 2017-January 2018 mass uprising that demanded the overthrow of the Islamic Republic.

The effects of the deep economic crises which had already caused much suffering,  and the crushing weight of the U.S. economic sanctions, are now magnified by the  floods.   The government has been thoroughly incompetent,  and outside aid  was almost non-existent for the first two weeks.   During the past few days, some rescue equipment and food has been trickling in from Germany, France, Kuwait,  Turkey.  The promise of 1.2 billion dollars in assistance from Europe has yet to be seen.

Angry at the government’s  non-existing or inadequate aid efforts,   people in various flood-damaged zones have been trying to help each other by creating makeshift flood barriers and doing rescue operations.    In some cases,  there have been confrontations between the IRGC (Islamic Revolutionary Guard Corps) and locals that  have led  the IRGC forces to withdraw  or become more violent.    For instance in Dasht-e Azadegan  in Khuzestan, the locals had built a makeshift flood barrier to  save their agricultural land and livestock.  The IRGC forces  destroyed the flood barrier because the new direction of the flood would have damaged oil and gas facilities.   In Poldokhtar in Luristan,  an IRGC commander was caught on video reporting that “no government official has the courage the enter the city because people are extremely angry and the conditions are dire.”   (Zamaneh,  April 5, 2019, اعتراضات سیل زدگان لرستان   )

What Caused the Floods and the Severe Damage?

Although the extremes in weather patterns brought about by climate change is a major cause of these floods,  it is  not the only cause.    The other main causes are years of government-run  deforestation to  turn forest land into real estate construction zones,  the establishment of dams for generating electricity, construction near rivers, coasts or in known flood paths.

The floods will also not resolve Iran’s serious drought problem which has resulted from the massive overuse and destruction of underground water reservoirs.   Most of the water from the floods is going back into the Caspian Sea or the Gulf, or rivers without being absorbed by the soil  or underground water reservoirs.   Agricultural land turned into real estate construction projects or land without topsoil  cannot absorb the water in a way that would help the environment.

In the face of this catastrophe, both  the government and most of the various opposition forces claim that the problems stem from “mismanagement.”   What is missing however is a deep analysis from Iranian socialists that would show the connection between environmental disasters and the logic of capital.  The truth is that capitalism,  whether in private or state form,  uses humans and nature as mere means  in its insatiable drive for the expansion of value.    That “logic” and not merely mismanagement explains the drive to construct buildings in areas that for hundreds of years,  have been  known as flood paths.

A look at  other countries with  efficient capitalist economies also reveals that environmental catastrophes are increasing  in well-managed capitalist economies as well.  In China,  the air, water and soil is extremely polluted.  In the U.S.  fires are increasing on the West Coast both because of climate change and because  forest land has been  turned into expensive real estate.  Fires then destroy the land even further and make it prone to mudslides when it rains.  In the U.S.,   floods are also affecting areas in the  Midwest where farms and businesses were built too close to rivers.  In the U.S. South,  The city of New Orleans has still not fully recovered from  Hurricane Katrina (2005)   which mostly hurt the poor and people of color.   (See Smith Micth and John Schwartz, Hard Choices in the Midwest as Levee After Levee Drowns.  New York Times,  April 1, 2019)

What Can Be Done To Help the Iranian People?

The floods  have further intensified the deep class divisions inside Iran and the prejudices of the state against national and ethnic minorities such as Kurds, Arabs and Lurs.   Life has become  even more difficult for women who already suffer as second-class citizens.   Homelessness, food shortages and contagious diseases are bound to increase.

The Iranian government continues to spend billions of dollars on its imperialist interventions in Syria, Iraq, Lebanon and Yemen while it cannot provide basic aid to the 26  provinces which have been affected by the floods.   At the same time U.S. imperialist  sanctions  which technically do not include food and medical supplies, prevent those goods from being sent to Iran because all banking transactions are  prevented by the sanctions.

International solidarity from socialists who oppose both the Iranian regime and U.S. imperialism is critical at this time.

We need campaigns to demand that aid be sent to those suffering inside Iran and at the same time demand the release of imprisoned feminists, workers,  teachers, oppressed minorities  and environmentalists.   Eight Environmental activists have been charged with the crime of espionage and face the death penalty.

We need to help the current class struggle in Iran move in a genuine revolutionary socialist direction.  Otherwise the deep anger brought about by the current catastrophic situation would be used by monarchists and other right-wing populists who only offer “better managed capitalism” as the alternative.

If you would like to help organize solidarity activities in support of labor, feminist and environmental struggles in Iran,  please contact the newly formed Transnational Socialist-Humanist Solidarity Network: