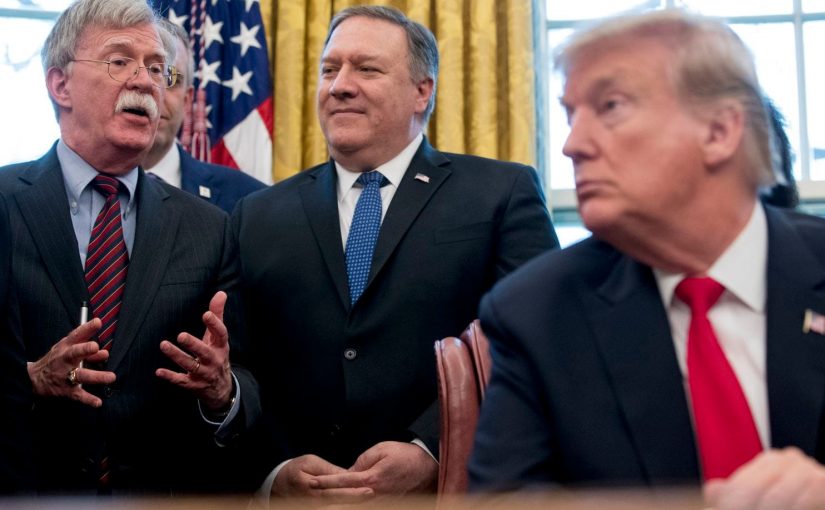 Stopping the ominous drive toward a direct U.S. war against Iran demands opposition both to U.S. imperialism and to the repressive Iranian regime.  It demands reaching out to labor, feminist, student and oppressed minority struggles in Iran and connecting them to labor, feminist and anti-racist struggles in the rest of the region and internationally.     It demands explaining the necessary relationship between capitalism and war, and showing what can be a humanist alternative to capitalism.

The Trump administration  is openly taking  steps toward a military confrontation with Iran by sending  an aircraft carrier, B52 bombers and a  Patriot Missile interceptor battery and more naval firepower to the gulf region.  A meeting of President Trump’s top national security aides reportedly discussed a plan devised by National Security Advisor John Bolton,  one of the masterminds of the disastrous U.S. invasion of Iraq in 2003,  which called for sending up to 120,000 troops to the Middle East to attack Iran. (https://www.nytimes.com/2019/05/13/world/middleeast/us-military-plans-iran.html)

The U.S. claims that according to recent intelligence information, Iran is mobilizing proxy groups in Iraq and Syria to attack U.S. forces.   However even some Republican supporters and senior British military officials say that they have not seen such a report.

The  Iranian government  on the other hand has announced that given the U.S.’s unilateral withdrawal from the nuclear agreement it signed with Iran in 2015,  Iran will no longer abide by all the terms of the  agreement.

Earlier in April,  when the U.S. administration designated  the Iranian Revolutionary Guard Corps as a  terrorist organization,  Iranian president Hassan Rouhani declared in a speech on Nuclear Technology Day,  that “If the aim of your sanctions was to reduce our military power,  you should know that during the past year,  we have obtained missiles and weapons that you cannot even imagine.  You cannot stop our military power.”   The Iranian parliament then signed  a bill that designates all U.S. security and intelligence forces in west Asia as terrorist. (  “روحانی:  موشک هایی داریم که در مخیله تان نمی گنجد.زمانه،  20 فروردین 1398)

At the same time,  several oil tankers (including two owned by Saudi Arabia) off the coast of  the United Arab Emirates  were sabotaged on May 12.   No entity or country has taken responsibility for these explosions.  However, sources from the U.S. army  say that Iran is being held responsible.   Iranian backed Houthi rebels have also used drones to attack Saudi Arabian oil facilities.

The possibility of any explosion or confrontation leading to U.S. airstrikes and a full-scale war is very likely.   Saudi Arabia and Israel are  strongly behind such a war and have indeed promoted claims that Iran plans to attack U.S. forces in the region.

Why Is The Trump Administration Pushing for War with Iran?

Although the Trump administration does not seem to have a coherent policy with respect to the Middle East,  its policy vis-à-vis Iran has been very much determined by its aim of strengthening its  most important regional allies,  Israel’s Benjamin Netanyahu  and Saudi Arabia’s Mohammad Bin Salman, two powers which have joined in an effort to wage war on Iran, a regional rival.   It has also promoted the creation of an “Arab NATO” mainly consisting of the Gulf states and Jordan as a bulwark against Iran and its reliance on Russia and China.

This administration, also seeks to use a possible war on Iran as a convenient way to turn attention away from its own assaults on labor, civil rights and women’s rights in the United States and to promote its authoritarian policies domestically  in the name of national security.

To the extent that this administration wants “regime change” in Iran,  it does not even pretend to be in favor of democracy.  Instead,  as Secretary of State,  Mike Pompeo stated very clearly in a speech to a group of Iranian supporters in Washington D.C., on April 24,  the goal of the United States is to promote “transfer of power” and “leadership by a group of non-revolutionaries.” ( پمپئو در جمع ایرانیان:  واشنگتن در به کار بردن لفظ رزیم چینج محتاط است.زمانه،  2 اردیبهشت 1398 ا ) John Bolton, National Security Advisor, has also been working closely with the Mojahedin-e Khalq (MEK), an Iranian militarist cult which receives funding from the U.S.,  supports U.S. military intervention and was for years allied with the butcher regime of  Saddam Hussein in  Iraq from which it received arms and support.

Whither Iranian Progressive and  Revolutionary Opposition?

In the words of an Iranian journalist,  Rahman Bouzari:  “Trapped between the Trump administration and the domestic oppressors are ordinary people. They are offered a choice between imperialism and authoritarianism. However miserable their situation might be, they continue to reject both.”

The Iranian masses are currently being crushed under the heavy weight of  U.S. sanctions,  a militarized authoritarian state capitalist regime,  and the effects of the recent massive floods which have led to the displacement of millions.

While they are deeply afraid of a U.S. military assault,   they continue to express their opposition to the regime in various ways:

*Ongoing labor struggles and strikes  have led to the arrests of almost all the leaders of the existing independent labor unions and the teachers’ union,  including Esmail Bakhshi of the Haft Tapeh Sugar Cane Workers’ Union, Jafar Azimzaeh of the Free Union of Iranian Workers and Esmail Abdi of the Teachers’ Union,  to name of a few.

* Prominent women’s rights activists are currently in prison and have received long prison terms or await trial because of their activism and their writings. These include Nasrin Sotudeh,  a human rights attorney who has defended the Girls of Revolution Avenue (women who took off their headscarves in public and were arrested and imprisoned as a result),  Narges Mohammadi,  a leader of a campaign against the death penalty, and Parvin Mohammadi, co-leader of the Free Union of Iranian Workers,  to name a few.

*Kurdish political prisoners are serving prison terms for opposing discrimination against Iran’s Kurdish national minority.  Over one thousand Arab human rights activists  have been detained in the southern province of Khuzestan.   Bahai and Sufi activists are imprisoned for being religious minorities.

*Many student activists and dissident intellectuals are either detained or have been released on heavy bail which allows the regime to send them back to prison at any moment.

These are the forces that could help lead a nationwide progressive and possibly revolutionary movement to overthrow the Islamic republic and to oppose war and imperialism in the region.  However, given the crushing force of U.S. economic sanctions and the current threats of war from the U.S.,  the Iranian regime has been able to increase its repressive apparatus and crack  down on any efforts to oppose the regime from a progressive standpoint.

A Labor Day protest  of feminist, student and labor activists in Tehran on  May 1, was  viciously assaulted by security forces who arrested many of the protesters.

Another protest by hundred of student activists at Tehran University on May 13, 2019 opposed the compulsory veil and the “morality police.”   They forced members of the Basij (“volunteer” force of the Islamic Revolutionary Guard Corps) off the stage before they were attacked by the Basij and the security police.

Desperately needed is international solidarity from  progressive and left forces throughout the world to support these ongoing struggles  and to oppose a U.S. war on Iran.   Such an effort needs to oppose both U.S. imperialism and Iranian sub-imperialist interventions in Syria, Iraq and Lebanon.

What Kind of Solidarity Is Needed to Find A Way Out of War, Imperialism and Capitalist Authoritarianism?

In December 2017-January 2018,  popular protests throughout Iran openly called for the overthrow of the Islamic Republic and an end to its military interventions in the region.  The wave of labor, feminist and student protests that have continued since then however, have often lacked an explicit opposition to Iran’s military interventions in the region.

The reformist and leftist intellectuals who oppose U.S. military intervention, and are also strongly nationalist,  do not offer an anti-war discourse that goes beyond anti-U.S. imperialism.

With a few exceptions, no systematic effort has been made from a progressive and socialist standpoint to expose and oppose Iran’s interventions in Syria, Iraq, Lebanon, Yemen,  its ongoing missile program and its prior efforts  to develop nuclear weapons.    Even a systematic discussion of the dangers of nuclear energy without nuclear weapons and the lessons of the Chernobyl and Fukushima disasters has not been promoted.    For the few exceptions, see: https://www.radiozamaneh.com/243343,  https://www.radiozamaneh.com/tag/%D8%A7%D8%AA%D9%85-%D9%88-%D8%B1%D9%88%D8%B4%D9%86%DA%AF%D8%B1%DB%8C

Desperately needed inside Iran is an independent socialist vision that is opposed to Iran’s military interventions, all regional and global imperialist powers, patriarchy, racism, and also explains why capitalism in private or state form always breeds war.

Within the U.S. and international Left,  most of those who actively oppose U.S. imperialist sanctions and war threats against Iran,  do so from a standpoint that is uncritical of the Iranian regime.  Hence they are not able to appeal to the U.S. and international masses or call on them to relate to the struggles of workers, women and oppressed minorities inside Iran.  They also seem to have no genuine interest in these struggles inside Iran.  (See Code Pink  https://www.codepink.org/day_3  and Open Letter to Code Pink https://oaklandsocialist.com/2018/12/02/open-letter-to-code-pink/ )

A much smaller segment of the international Left opposes both U.S. imperialism, and other global and regional imperialist powers in the Middle East.  It is trying to form active relations of solidarity between labor, feminist and oppressed minority struggles throughout the Middle East/North Africa region and globally.   This effort has been energized by the Sudanese and Algerian popular uprisings which are both challenging militarized capitalist regimes and have strong labor, feminist and anti-racist dimension. (See Alliance of Middle Eastern Socialists https://www.allianceofmesocialists.org/)

A direct war between the U.S. and Iran can lead to unimaginable destructive consequences and will only strengthen the Trump administration’s authoritarian agenda.   Even if the Iranian regime is overthrown,   the Trump administration and its Israeli and Saudi allies will do everything in their power to not allow for any  progressive or revolutionary alternative to emerge from the ground.   What happened in Iraq after the 2003 U.S. invasion is a possible scenario.

Stopping the ominous drive toward a direct U.S. war against Iran demands opposition both to U.S. imperialism and to the repressive Iranian regime.  It demands reaching out to labor, feminist, student and oppressed minority struggles in Iran and connecting them to labor, feminist and anti-racist struggles in the rest of the region and internationally.     It demands explaining the necessary relationship between capitalism and war, and showing what can be a humanist alternative to capitalism.