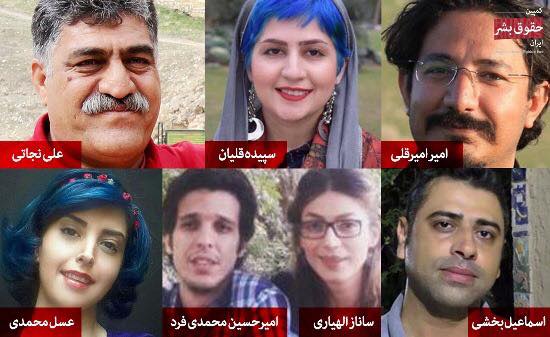 International working class solidarity calls on workers of all countries,  especially countries in which workers still have the basic rights of free speech, protest and association,  to support the struggles of their fellow working class members, condemn the anti-labor and anti-democratic policies of the Islamic Republic.

A Wave of increasing repression, arrests and  inhuman prison sentences of workers, teachers,  retirees, women, students, writers, journalists and environmental activists in Iran continues.     The  repression, imprisonment and court convictions of  workers are a clear and continuous violation of basic  labor rights and principles  by the Islamic Republic of Iran.

As a member of the International Labor Organization (ILO),  the Iranian state is obliged to respect these principles and rights.    However, Independent labor organizations,  including the Syndicate of Haft Tapeh Sugar Cane Workers and the Syndicatie of Tehran Vahed Bus Workers which were established  some years ago and have the sole purpose of defending the rights of workers and toilers, are  treated by the judiciary  and security officials  as worse than criminals.   History is our witness.  The bitter experiences that have ruined the lives of the majority of toilers in Iran prove that the most basic rights of workers and toilers in Iran are not respected.

The repression of activists,  members of syndicates and other labor organizations,  striking workers,  women, teachers, retirees has intensified and has reached ominous proportions.   A large number of workers have turned to strikes, protests,  marches and sit-ins.  The demands of workers in general have been the following:  1.The payment of unpaid wages and benefits.  2. Improvement in labor conditions.   3. Opposing the privatization of state-owned companies which has in many cases led to shutting down the companies and expelling the workers.  4.  The release of imprisoned workers, political prisoners,  prisoners of conscience and civil rights activists.  5.   The right to form independent organizations.

For years,  the workers of Haft Tapeh Sugar Cane Factory have been subjected to the most intense forms of discrimination and repression for the crime of fighting for their basic legal rights.  Despite the U.N. charter on human rights,  basic labor laws and ILO Conventions  87 and 98 concerning the right to free speech, association, protest and  strike,  the work places and homes of workers  are under occupation by military and security forces and workers have been subjected to a barracks-like life.   Despite this,   the workers of Haft Tapeh Sugar Cane Factory, went on  strike for over a month and protested to demand their unpaid wages, to oppose privatization and the corrupt management,  and to demand the release of imprisoned workers.  The authorities responded by arresting, beating and torturing many of these workers and the activists who supported them.

These workers and their labor activist supporters were subjected to torture and the most intense pressures during their detention and their preliminary court hearings.   Based on the  baseless charges that were issued against them,  the judicial authorities sentenced them to long prison terms of up to 18 years for some.

Three university students who were protesting alongside the families of the detained in front of the court building,  were also arrested.  These were Roham Yeganeh,  Hirad Badaghi and Fardi Lotfabadi.

In the meantime, strikes and marches started at the Ahvaz Steel Company where the demands of workers have been similar to the Haft Tapeh workers.   A form of solidarity and coordination was created between the two which have become centers of  labor struggles in southern Iran.

According to the latest reports,  41 of the protesting Ahvaz Steel workers have been summoned to court.  Their  only crime is that they have demanded their unpaid wages and oppose the privatization of the company and the expulsion of its workers.

On May Day 2019,  workers in Tehran and several other cities, just like workers in other parts of the world,  gathered to honor labor day and to show their solidarity and unity.   At the Tehran gathering which was peaceful,  over 51 participants were beaten and violently arrested.  Many of them were released temporarily after posting heavy bails,  but were later sentenced to long prison terms after unjust trials.

The rest of those arrested [and released on heavy bails] are also in danger of facing legal proceedings.

We also call your attention to other arrested labor activists who have received prison sentences:

The above are only some of the Islamic Republic’s anti-labor and anti-human acts.  According to  established  international norms,  the right to strike, march and protest cannot be denied any citizen.  Furthermore,  the Iranian government,   as a member of the International Labor Organization,  is obliged to respect and enforce basic labor rights.  According to the International Labor Organization,  these basic rights are the following:   The right to association,  the right to collective bargaining,  the abolition of forced and violent labor,   the abolition of child labor and the abolition of discrimination in employment.  These rights are universal.   Their enforcement is not based on the level of economic development of a country or its endorsement of conventions related to the above four basic rules.

The Islamic Republic has violated and ignored basic labor laws throughout its existence.

Iranian authorities have responded to the protests and demands of workers, teachers, women, retirees,  journalists,  students,  artists,  writers by widespread arrests,  beatings,  torture of the imprisoned,  and the display of televised forced confessions,   long prison sentences and shameful medieval punishments such as flogging.

Despite the description that we gave of this regime’s oppressive practices,  it is currently a member of the International Labor Organization and other international human rights organizations.  Given the above undeniable evidence,  if this regime is not strongly and resolutely protested and challenged or if for any reason,  the repressive policies and practices of the ruling power  in Iran are ignored, such a display of  apathy or connivance can lead to more heinous results for the labor movement in Iran and the further aggravation of the economic,  political and cultural situation of over 95 percent of Iran’s population of 81 million.

International working class solidarity calls on workers of all countries,  especially countries in which workers still have the basic rights of free speech, protest and association,  to support the struggles of their fellow working class members, condemn the anti-labor and anti-democratic policies of the Islamic Republic,  and force their governments to oblige the Iranian regime to respect labor rights within the framework of international labor rights and principles.  International labor  solidarity also demands that workers call on  international organizations such as the International Labor Organization to stand up to Iran’s violations of labor rights and not close their eyes to the Islamic Republic’s wrongdoings and anti-labor policies.

The Alliance of Retirees

This translation was originally published by the Alliance of Middle Eastern and North African Socialists on September 26, 2019.