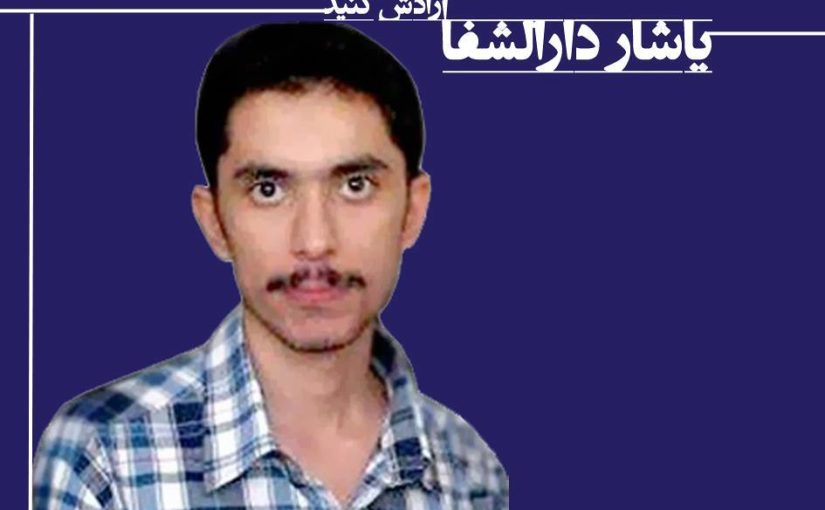 Darolshafa is a unique type of humanist intellectual activist who has broken with the dogmatism, nationalism and sexism of many members of  previous generations of Iranian socialists.  His  contribution to emancipatory thought and struggle at this critical moment in Iran’s history is urgently needed.   We urge socialists around the world to publicize the case of this brave intellectual activist,  demand to know where he is being held, hold the Iranian government accountable for his safety, and call for his immediate release.

Yashar has been temporarily released from Tehran’s Evin prison on heavy bail.  He will have to appear in court where he will face charges.

Yashar’s brother,  Kaveh Darolshafa,  who was arrested a few days after him is still in solitary confinement at Tehran’s Evin prison.   Kaveh is a labor activist and music teacher.  After participating in student protests at Tehran University in 1999,  he was expelled from the university.   He was imprisoned for several months in 2009 during  the Green Movement.    He was also imprisoned again in 2015 because he joined a protest gathering of  families of political prisoners in front of the office of the judiciary.

Friends of Yashar think that the petition below, signed by over 150 activists and academics, played an important role in compelling  the authorities  to agree to his temporary release on bail.  What is done now to continue to defend Yashar when he appears in court and to defend his brother, Kaveh,  can also make a difference.

On Thursday November 21,  five days after the outbreak of a popular uprising against the Islamic Republic of Iran,  Yashar Darolshafa was violently arrested  by government authorities at a friend’s home and  taken away.   Since then, family and friends have not heard from him.   Subsequent efforts by family members inquiring about his status,  have not led to any results.

Darolshafa is a  33 year old PhD candidate in the School of Health and Social Welfare at Tehran University,  a journalist and an activist with deep interest in student, labor, women’s and oppressed minority struggles and rights.  He  represents the combination of brilliance, erudition  and compassion.

He has paid a heavy price for his critical thinking and commitment to human emancipation.    His efforts in producing a youth journal,  Sarpich  (Insubordinate) with a special 2009 issue critically evaluating the 1979 Revolution,   landed him in prison for the first time.  Later he was sentenced to five years in prison for his participation in the 2009 Green Movement.

While in prison (2012-2016), Darolshafa continued his research with an extensive critique of the Iranian Shi’a reformist thinker, Ali Shariati.  He also closely followed the Syrian uprising against the brutal Assad regime and the Kurdish struggle for self-determination  in Rojava,  northern Syria.

After  he was released on parole in late 2016,   despite extreme pain from beatings in prison,  he was drafted into compulsory military service.  He then returned to his graduate studies  in sociology, health and social welfare.

He responded to the December 2017-January 2018 popular uprising in Iran by writing a series of articles on the history of Iranian labor struggles  from the early 1900s to today.  He also wrote about and strongly supported women’s rights activists  known as  the Girls of Revolution Avenue who took off their scarves in public to oppose the compulsory hijab.

Most recently Darolshafa was writing an essay,  comparing and contrasting Ali Shari’ati and Frantz Fanon with the aim of reclaiming Fanon’s critique of Third World nationalist intellectuals.

Darolshafa is a unique type of humanist intellectual activist who has broken with the dogmatism, nationalism and sexism of many members of  previous generations of Iranian socialists.  His  contribution to emancipatory thought and struggle at this critical moment in Iran’s history is urgently needed.

We urge socialists around the world to publicize the case of this brave intellectual activist,  demand to know where he is being held, hold the Iranian government accountable for his safety, and call for his immediate release.

He needs and deserves our support!

Afary, Frieda, Producer of Iranian Progressives in Translation and member of Alliance of Middle Eastern and North African Socialists,  U.S.A.

Anderson, Kevin B., University of California and International Marxist-Humanist Organization

Arassi, Mojdeh, Ex-political prisoner and editorial member of the “In Defence of Marxism”, Germany

Bohmer,  Peter , faculty in Economics, The Evergreen State College, Economics for Everyone, Olympia Movement for Justice and Peace, USA

Daher, Joseph,  Swiss Syrian academic and activist, author  of Syria after the Uprisings  and Hezbollah: The Political Economy of the Party of God,  member of Alliance of Middle Eastern and North African Socialists

Durel, Sedat , General Secretary of the Union of Revolutionary Workers in Telecommunication and Call Centers, Turkey

Giordano, Juan Carlos, national parliament member from the Left and Workers’ Front (FIT) in the province of Buenos Aires, national leader of Socialist Left (IS),  Argentina

Iwani , Homayon, Ex-political prisoner and editorial member of the “In Defence of Marxism”, Germany

Matin, Kamran, Associate Professor of International Relations at the University of Sussex, UK

Rodriguez, Simon,  leader of Partido Socialismo y Libertad
(Socialism and Liberty Party, PSL) of Venezuela and an internationalist
militant.  Co- author of Why Did Chavismo Fail?  A Balance Sheet from the Left Opposition

Trimarchi, Mercedes,  leader of the Isadora women’s group, and legislator of the Socialist Left in the province of Buenos Aires, Argentina.

Zekavat, Sina,  Anti-war activist and member of the Alliance of Middle Eastern and North African Socialists

For an updated list of the signatories go to the website of the Alliance of MENA Socialists www.allianceofmesocialists.org

If you wish to add your name to the list of signatories,  please write to [email protected]