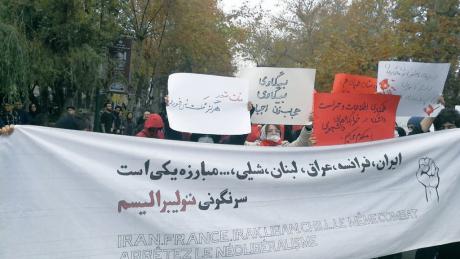 We, the students, while maintaining the distance from both poles, emphasize the common fate of the Iranian masses and all other working class around the world – from Chile to Iraq, Syria, and Lebanon. We defend their rightful protests and we will continue our struggle to support their interests.

Here and now, in one of the most important historical moments in which we live, the masses in different parts of the world have risen up against the oppression caused by the capitalist system. In less than two years, the mass upheaval in Iran has raged again. The accumulation of contradictions and the inability of the existing capitalist-theocratic regime has led to numerous uprisings, including the revolt of January 2018. Previous bloody repressions could not extinguish the fire of the wrath of the oppressed and the remnant sparks of the flames in 2018 was blazed again due to the fuel price increase – this time in November 2019. The extent and intensity of the protests grew, and so did the magnitude and intensity of the repression. With the silence of media and internet shutdown,‌ bloody repression took place from the reed-beds of Mahshahr to the alleys of Kurdistan, suburbs of Shiraz, deserts of Sistan and streets of Tehran, leaving numerous deaths in its wake. But we, the students, at this critical moment, wounded by the terrible whips of oppression and exploitation, are not and will not be passive observers.

We have been hearing the sounds of these whips for years as the screams of the masses. But the repetition of these sounds, with their different frequencies in history, has not made us accustomed. Everyone has heard the sound of repression and the roar of the oppressed, even those whose interests were in ignorance. The abortive efforts of reformists, principalists, monarchists, and so forth to confiscate, distort, and deny these voices, only further prove this claim.

Today, the oppression of the masses in various parts of the world is affected by the intensification of the contradictions of the world’s capitalist system. The current government, in all its forms and appearances, has been able to take power within these contradictions. In trying to resolve these contradictions for its own benefit, the state has intervened in devastating conflicts in the region, extending its military arms to Iraq, Syria, Lebanon and Yemen. The interlocking interference of the dominant imperialist countries and the existing Iranian regime in the region, has had nothing but increased oppression and exploitation for the masses of the region. Thus, any proposed reformist solution, while maintaining the framework of capitalist system, both domestically and internationally, continues to reproduce exploitation and repression in various forms.

We, the students, while maintaining the distance from both poles, emphasize the common fate of the Iranian masses and all other working class around the world – from Chile to Iraq, Syria, and Lebanon. We defend their rightful protests and we will continue our struggle to support their interests.

The present state has been able to link the most modern form of exploitation to the oldest forms of oppression. We are faced with a state whose rules of law are influenced by the dominant religious ideology. The suppression of religious minorities (Christians, Sunnis, Dervishes, etc.) are rooted in these laws. We, the students, without any but and if, defend freedom of speech, freedom of belief and religion and declare our solidarity in those rightful demands and struggles for mass liberation.

Gender antagonism is another inherent contradiction of the capitalist system, gaining specific characteristics due to the ruling ideological apparatus in Iran. We, the students, are aware of the importance of the struggles for women’s emancipation to build a society free of oppression and exploitation, and we consider that all the traditional and modern forms of women’s oppression ultimately result in reproduction of capitalism and its existence. On the other hand, this oppression is one of the most fundamental pillars of the dominant ideology and plays a decisive role in the formation of the ruling state. The mechanisms of this ideology are to control and subordinate women in all places and institutions, from the family and the university, to the workplace and the street. But women, with all their protests over the decades – from the women’s rally in March 1979, to the students’ gathering against the compulsory Hijab in May 2019, while maintaining the distance from the right opposition, have not remained silent against this tyranny. Alongside these struggles, we, the students, have heard the roaring anger of women for genuine emancipation and again declare our solidarity in the struggles against the continued “integration of religion and government” and all forms of patriarchy.

Also, in recent years, national antagonism has reached a critical point, with particular prominence in recent struggles. People in different regions of Iran have fought bravely in these struggles: Arabs, Turks, Lurs, Baluchis, Kurds, Turkmen, and other ethnicities, live under oppression, unemployment and poverty. This has only been intensified, with the most obvious cultural and social demands of these people being severely suppressed. While strenuously defending the struggles of the ethnic minorities, we, the students, declare our opposition to all forms of nationalism and thereby seek to tie their rightful struggles to the emancipation of the masses.

To put it in a nutshell: We have spent two restless years, witnessing the increasing proliferation of repression and exploitation from January 2018 to November 2019. The years leading up to January 2018 accelerated the intrinsic crisis of the existing system and triggered the reaction of various groups of oppressed people, with its appearance being observed in the widespread workers’ protests and strikes from 2011 onwards. The solidarity of the workers’ movement alongside the protests of farmers, teachers, students, and Girls of Enghelab Street gave special importance to January 2018. All of these contradictions, in their unity, have formed the entirety of the state. These contradictions are neither possibilities nor are they arbitrary – they are the essential necessities on which the life of the ruling state lies upon.

In the meantime, the role of the university is crucial. Over these years, the university has become an institution to reproduce and stabilize the status quo and an institution that has been making efforts to suppress students’ resistance over the past few decades. Mass arrests and intense judicial convictions of students in the 2010s, parallel institutions, disciplinary rules, starred students (students who are deemed politically unreliable or undesirable by one or more of the Islamic Republic’s numerous intelligence apparatuses) and disenfranchising students, intimidation of students’ union members and their families by security agencies and its academic arm, university’s security guard, are examples of these efforts. This year, we have seen yet another sign of absence of university autonomy and open cooperation with security agencies. Some students were arrested with collaboration of law enforcement and security guards, using different techniques such as arresting them in the dormitories or using an ambulance (as a prisoner transport vehicle). Furthermore, university officials and security guards’ attempts to intimidate students’ families in order to give judicial commitment to file a lawsuit and give electric shocks to an arrested University of Tehran students’ union member, revealed the utmost degree of this filthy collaboration.

In the meantime, the continuous silence of the universities’ lecturers and professors is the reflection of systematic repression over these decades. Professors, whose functionality is reduced to reproducing the prevailing ideology and maintaining the status quo, have lost all their socio-political missions. We proclaim that, in our view, the silence of the professors has no meaning other than clear cooperation with the system in oppressing the masses and the students; and we will not remain silent against this cooperation. Like the other independent movements in the past decades, the independent students’ union movement of the 2010s is moving forward, resisting against forces that want the university institution to be an ideological institution reproducing the status quo. We and our arrested classmates, like many others, have always committed ourselves not only to support the exploited masses, but also to deliver our message to society. The response of the repressive forces has been coercion, intimidation and repression. They are constantly frightening us with the potential consequences of our actions, but the crushing machine was neither able to block the street nor the university. Let us be clear this time: We, the students, do not forget the blood on the street. We promise this to both the martyrs and their murderers.