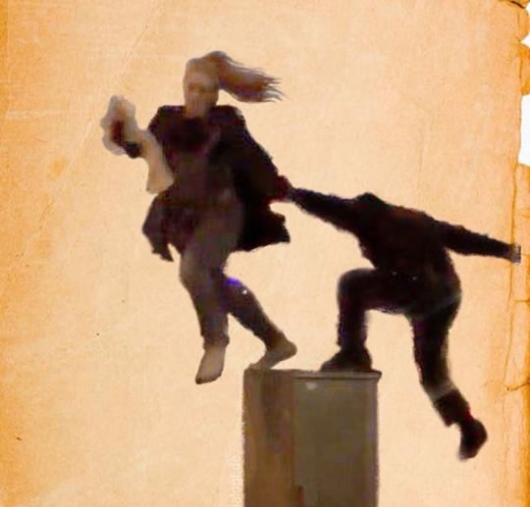 We the signatories of this statement,  refuse to separate our opposition to U.S. imperialism and any imperialist war drive on Iran,  from our support for the progressive and revolutionary  social justice struggles of Iranian women, workers and oppressed minorities against their regime.

As socialist feminists,  we support  the courageous Iranian women who have been taking off their headscarves in public to express their opposition to the compulsory hijab in Iran.   Since December 27, dozens of women have taken off their scarves in public places and have been arrested or temporarily released after posting heavy bails.

These brave women who believe that wearing the hijab should be a matter of individual choice without any imposition from above,  reflect the wishes of a majority of the Iranian public  according to the Iranian regime’s own polls.

In fact, since December 28, 2017,  a wave of popular protests and strikes has been spreading throughout Iran in opposition to the Islamic Republic.  These protests have included broad sectors of the Iranian working class,  women and men, mostly young,  and have  been preceded by and continue to involve protests and strikes by employed and unemployed workers,  students, teachers, healthcare workers, retirees,  the dispossessed, political prisoners and the families of political prisoners.   They include members of various oppressed national minorities such as Arabs, Kurds and Azaris as well as persecuted religious minorities such as Baha’is.

The latest expressions of opposition to the compulsory hijab by individual women have been not only part of this new wave of popular protest, but  also part of a four-decade long resistance by Iranian women against the Islamic Republic,  and  for civil rights and  human rights.  Despite severe repression,  Iranian feminists have expressed themselves  through novels, blogs, websites, group discussions and  translations of works by international feminists.

Some socialists,  inside and outside Iran,  have belittled the  protests against the compulsory hijab as “liberal feminism” and “not radical enough.”  In the words of a seasoned socialist feminist inside Iran however:  “Today,  Iranian women need freedom from headscarves, full veils or any cover.  They need the civil rights that they have been denied.  Once the expansion of the demonstrations leads to the realization of these freedoms. . .  the struggle can go beyond them and become the beginning of women’s struggle against the reification of social relations.”

Almost 40 years ago,  Tens of thousands of  Iranian women throughout Iran, marched and protested  for five days from  March 8 to March 12, 1979 to commemorate International Women’s Day and  to say no to Ayatollah Khomeini’s order to make the hijab compulsory and  abolish the limited rights which the family protection law under the previous regime gave them.   Those brave Iranian women who had participated in the revolution against the repressive regime of the Shah Mohammad Reza Pahlavi,  chanted:  “We Didn’t Make a Revolution to Go Backward.”

At that time, some Iranian socialist men supported the women’s protests.  However, most  Iranian socialists and socialist organizations opposed the protests and called on women to stop their marches and sit ins because they were “diverting” the struggle from the main goal of opposition to U.S. imperialism and the monarchy.

International leftist feminist, Kate Millett, and  socialist and Marxist feminists like Claudine Moullard, Leila Sebbatt, Simone De Beauvoir, Raya Dunayevskaya  however, reached out to Iranian women with statements of support, articles,  or in the case of Millett and De Beauvoir’s colleagues,  actual fact-finding trips to Iran to meet and March with Iranian women.    They recognized the importance of women’s protests against the compulsory hijab  and the women’s liberation struggle in general as an effort to deepen the revolution and challenge Khomeini’s drive to impose a counter-revolution.

Today, we the signatories of this statement,  refuse to separate our opposition to U.S. imperialism and any imperialist war drive on Iran,  from our support for the progressive and revolutionary  social justice struggles of Iranian women, workers and oppressed minorities against their regime.

We too are suffering from rising authoritarianism,  right-wing populism, and neo-fascism in the U.S., Europe, Russia, China,  South Asia, Africa,  Latin America, Australia as well as whole of the Middle East.

In the West,    hard fought women’s rights  in what have been  known as “ liberal democracies”  are under severe attack.   At the same time,  the new “Me Too Movement” against sexual harassment and sexual assault is growing , and targeting  the abuse of women in all spheres whether government,  academia or the arts,  corporations or factories,  service sector jobs or the family.   African American women who have always experienced the triple oppression of racism, sexism and capitalism continue to represent the most radical dimension of women’s struggles.

Given the global nature of the assault on women,   it is extremely important for women who oppose capitalist imperialist patriarchy, misogyny, racism and homophobia to come together and link our struggles  to find a  new direction forward  and to develop  an alternative  humanist way of producing, living, organizing  and relating to our fellow human beings and to nature.

Toward this aim, we salute our Iranian sisters and reach out to them in solidarity.  We call on others who agree with this statement to join us in this effort.

To see the long list of signatories please go to

If you wish to  add your signature to this list,  please contact the Alliance of Middle Eastern Socialists at