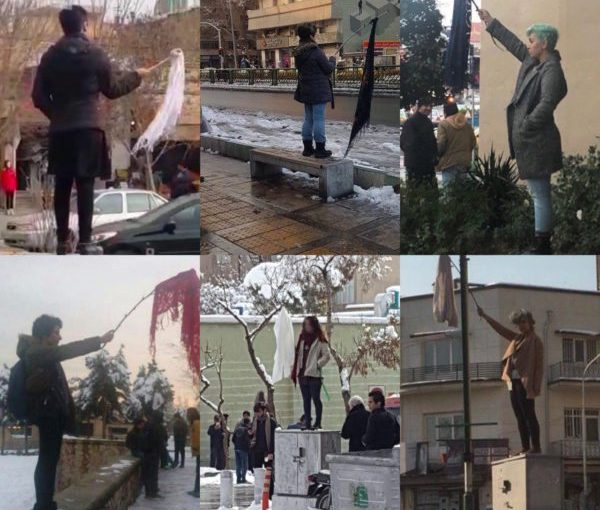 These are incredibly courageous acts  in a country in which  the hijab is compulsory,  and where women who do not wear their headscarves properly can be arrested,  assaulted, face fines, lashes and imprisonment. . . These acts of protest  are part of a broader wave of mass protests for social justice inside Iran today.

On December 27, 2017,  just one day before a wave of nationwide working class protests against the Iranian regime,  a young Iranian woman,  Vida Movahed,  stood on a utility box in public on the busy Revolution Avenue in Tehran,   took off her headscarf and waved it on a stick for everyone to see.  This was an incredibly courageous act in a country in which  the hijab is compulsory,  and women who do not wear their headscarves properly can be arrested,  assaulted, face fines, lashes and imprisonment.

Since late December,  twenty nine  women throughout Iran have been arrested for the same defiant act.   In a few cases,  they have been joined by a  male friend.  Some have been released after posting heavy bails.  Others like Narges Hosseini in Kashan have refused to express remorse or could not afford to post the heavy bail,  and are still in prison.    Polls released by the government itself have  shown that most Iranians think the hijab should be a matter of individual choice.

It is not accidental that Vida Movahed’s challenge to the compulsory hijab in public occurred one day before the start of a series of nationwide  working-class protests against the Islamic Republic.  The wave of nationwide demonstrations which lasted for two weeks,   has  been preceded and followed by protests, strikes and sit-ins  of workers, teachers, nurses, students, retirees, political prisoners  and families of political prisoners.

Iranian women have borne the brunt of the repressive regime of the Islamic Republic.   They face discrimination and second-class  status as daughters, wives,  mothers, students, employees,  unemployed workers or part-timers,  and face even more discrimination if they are members of an oppressed national or religious minority.   However,  they also represent 60% of university students,  publish a wide variety of novels, express themselves in blogs and websites, hold study groups, forums, and publish translations of works by international feminists.   Hence the brave act of an individual woman who took off her scarf in public on a busy Tehran street on December 27,  represents something more than her as an individual.  It also expresses the collective consciousness of a new generation of Iranian women.

At this critical time,  some socialists are still wondering whether the protests of women against the compulsory hijab should be supported.  They  are concerned that it is too focused on liberalism and is not directly questioning capitalist injustice.   Let’s return to how this question was posed in 1979 in order to draw some lessons.

Almost forty years ago,  in 1979, soon after the overthrow of the repressive Shah Mohammad Reza Pahlavi,   tens of thousands of Iranian women protested and marched for five consecutive days in various cities around the country to oppose Ayatollah Khomeini’s order which made the hijab compulsory and abolished the limited rights which the family protection law under the previous regime gave women.   Women chanted,  “We didn’t make a revolution to go backward.”

At that time,  the majority of the population still strongly believed in Ayatollah Khomeini’s claim to bring about  “the rule of the oppressed”  and social justice  against the monarchical system and against Western imperialism.    Khomeini had also used patriarchy and chauvinism to appeal to large sectors of men and many traditional women.

Most Iranian socialists who had been strongly influenced by Stalinism and Maoism,  did not challenge Khomeini’s  reactionary, capitalist, chauvinistic and misogynist views during the struggle against the repressive Shah(king)  and in the period immediately after the revolution.    Instead,  they subsumed all struggles to a very narrow “anti-imperialism.”  Hence most socialists did not support the protests of women against the compulsory hijab.  Those who did support them,  called on women to end their protests after the fifth day in order to not divert from the “anti-imperialist” struggle.

In contrast,  some international left wing feminists like Kate Millett and  socialist feminists like Claudine Moullard, Leila Sebbatt, Simone DeBeauvoir,  and Raya Dunayevskaya   reached out to Iranian women with statements of support, articles, or in the case of Millett and De Beauvoir’s colleagues,  actual fact-finding trips to Iran to meet and march with Iranian women.  Existentialist philosopher,  De Beauvoir wrote the following in her statement  from Paris on March 19:  “It is important to have a demonstration  — on the part of a very large number of women,  French women, Italian women and others – of solidarity with the struggles of Iranian women.” (  Afary and Anderson, p. 114).  Marxist Feminist philosopher,  Raya Dunayevskaya’s statement  from Detroit, “poured scorn on those Leftists inside and outside Iran who placed anti-imperialism in the forefront in such a way as to excuse the oppression of an ascendant mullacracy that was hemming in the rights of women, workers and national minorities.” ( Afary and Anderson, p. 116)   She ended her statement  by recalling the Chinese socialist feminist,  Ding Ling’s “Thoughts on March 8” and  Ling’s opposition to both Stalin and Mao which led to her being purged and exiled.

It is important to draw lessons from this experience for today.  Had the majority of Iranian socialists supported the women’s protests against Khomeini’s orders and had they viewed the struggle against patriarchy as an integral part of the struggle against capitalism and imperialism,  the 1979 revolution might have moved in a progressive direction instead of the counter-revolutionary direction that led to retrogression as well as the execution of many leftists.

Forty years later,  how do Iranian socialists fare on women’s struggles for liberation?

On the one hand,  Iranian socialist women have been actively involved in the new women’s movement and in writing articles and  translating books on feminist theory.   On the other hand, in the words of a young Iranian socialist feminist, “No much has changed.  There are leftist activists who have chosen to be quiet about the compulsory hijab because they think it is secondary to  poverty and high prices . . .Leftist feminism in Iran suffers from a great deal of discrimination in both the thought and the history of the left.  It is ignored, underestimated or pushed to the back or seen as secondary to other higher priorities.  For us leftist women,  this discrimination is the symbol of what we have experienced in the family and in society as a whole:  gender discrimination and systematic sexual repression. . . If the left does not make gender discrimination its own issue, there will be no hope for transforming our oppressive history.”

A young Kurdish socialist feminist writes:  “We are not the infantry of the Masih Alinejad campaign (an Iranian reporter for Voice of America who started a campaign called “my stealthy freedom”).   Although it cannot be denied that her campaign has had a role in encouraging and singling out the struggle against the compulsory hijab,  we have to recognize that the flags which women have raised with their hijabs,  are in practice much more radical than the Alinejad campaign.”

In the words of a seasoned Iranian socialist feminist who participated in the March 8, 1979 International Women’s Day protests against Khomeini:  “Today  Iranian women need freedom from headscarves, full veils or any cover.  They need the civil rights that they have been denied.  Once the expansion of the demonstrations lead to the realization of these freedoms . . . the struggle can go beyond them and become the beginning of  women’s struggle against the reification of social relations.    The generation that was born in the 1990s feels so imprisoned by the hijab,  that its rage and need to break these bonds has created a strong catalyst that can be effective for a fundamental transformation.  Whether this catalyst moves in the direction of a human alternative or a bourgeois alternative depends on the outcome of forces, the dominant mentality and the real possibility of organizing the deepest layers of society in the direction of forward movement.  Socialists who are  in search of a  fundamental transformation for human development,  will only play their role in the popular protests when they understand the significance and effect of this catalyst and openly support it.”

What the above cited statements, facts and historical lessons tell us is that the current protests against the compulsory hijab must be strongly supported by socialist feminists around the world.  Not only are they not a diversion from the struggle against capitalism, they are a step forward in the struggle for human emancipation and part of the broader wave of mass protests for social justice inside Iran today.

Afary, Janet and Kevin B. Anderson.  Foucault and the Iranian Revolution:  Gender & The Seductions of Islamism.  University of Chicago Press,  2005.

Dunayevskaya, Raya.  Women’s Liberation and the Dialectics of Revolution:  Reaching for the Future.  Humanities Press, 1985.