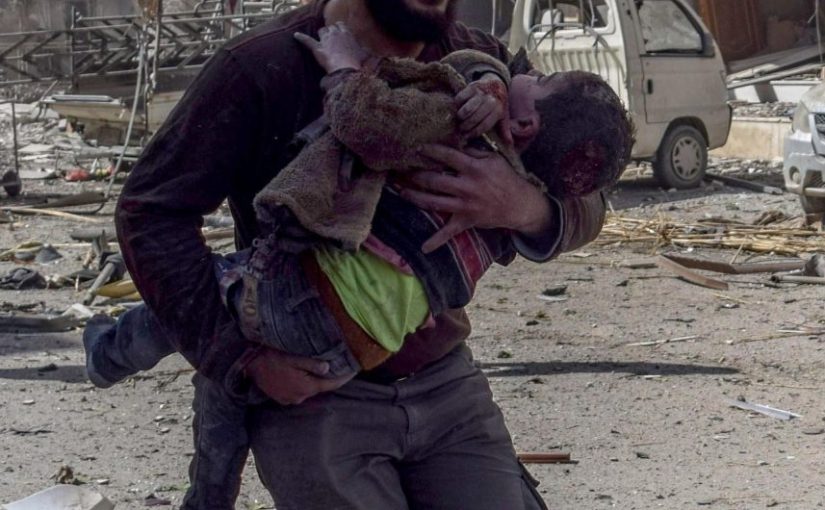 Those who  oppose both  the Assad regime and the Jihadists and all the imperialist powers,  need to focus on a glaring fact: Support for Assad and Putin has become a rallying cry for Western white supremacist, Islamophobic and anti-Semitic organizations and parties.  We need to show that opposing the Assad regime’s war on the Syrian masses is absolutely necessary for fighting the growth of white supremacy in the U.S.  and other Western countries.   Indeed it is necessary for challenging the growth of capitalist authoritarianism around the world. Assad’s Syria could be our future.

There is no lack of evidence about the barbarity of the Assad regime.  Supported by  Putin’s Russia and the Iranian regime,   it is currently  massacring  400,000 innocent civilians in Eastern Ghouta,  a suburb of Damascus which it has kept under siege since April 2013 and  subjected to chemical warfare as well.   The intensified daily bombing and shelling of Eastern Ghouta which  started in November 2017 and has led to hundreds of deaths of innocent civilians in just the past few days,  is part of the Assad regime’s systematic destruction of the Syrian revolution since 2011.   Ghouta has also suffered from the practices of a reactionary Salafist movement,  Jaysh al-Islam, which has repressed  and killled democratic activists.

While the U.S. and European powers such as France shed crocodile tears over Ghouta,   by now it should be clear that neither the U.S.,  not any of the Western powers ever genuinely  supported the Syrian revolution or wanted the overthrow of the Assad regime.  At most,  they wanted the regime without  the person of Assad because they considered the regime necessary for  imposing “stability” in the region.     Even  in April 2017 when the Trump administration carried out a missile strike against a Syrian government airbase where a chemical attack was launched, its aim was to show the U.S.’s  imperial might.

None of these powers could ever have any genuine concern for the Syrian masses who rose up against an authoritarian and butcher regime.   The capitalist and imperialist foundation of these powers would not allow them to do so.

Need for a New Discourse of Solidarity

Those who oppose both  the Assad regime and the  Jihadists and all  the imperialist powers,  need to focus on a glaring fact:  The authoritarianism that we see in the Assad regime, Putin’s Russia and the Iranian regime is increasingly growing in Western countries as well.   Assadism and Putinism might be the face of the future of the Western liberal democracies.  Indeed,  support for Assad and Putin has become a rallying cry for Western white supremacist, Islamophobic and anti-Semitic organizations and parties from the U.S. alt-right to the Italian far-right Forza Nuova,  all of whom are becoming more and more mainstream.

Facing up to this fact,  can also help us find a pathway forward in our solidarity work:  We need to show that opposing the Assad regime’s war on the Syrian masses is absolutely necessary for fighting the growth of white supremacy in the U.S.  and other Western countries.   Indeed it is necessary for challenging the growth of capitalist authoritarianism around the world.    Assad’s Syria could be our future.

The current evidence about the relationship between the Assad regime and the U.S. and European far-right,  reveals that Assadist totalitarianism has become an “inspiration” for various parties representing the more openly authoritarian and racist direction of capitalism.   http://www.aljazeera.com/news/2018/01/italian-fascists-adore-syria-bashar-al-assad-180125115153121.html

Thus the need to oppose the Assad regime’s bombing of Eastern Ghouta and Idlib  is not only  a concern for people in the Middle East but should also be a concern for anti-racist activists around the world.   Allowing Assad and his allies to continue their massacres in the name of “fighting terror” will greatly strengthen those who want to repeat that scenario in the U.S. and Europe and elsewhere.   It will have consequences for Black Lives Matter, Latinos, all people of color, Muslims and Jews.

Closer to Eastern Ghouta,   the current victory of the Assad regime will have direct and horrible consequences for the Kurds in Afrin and  Rojava.    Since the Summer of 2012,  the Democratic Union Party (PYD),  which leads the autonomous region of Rojava in Northern Syria,  has claimed that while it does not support the Assad regime, it has chosen to not engage in aggression against  it in order to advance its own political project.   The collaboration of the Syrian anti-Assad opposition with Turkey and their support for Turkish president Recep Tayyip  Erdogan have also convinced the PYD that its course vis-a -vis the Assad regime has been correct.

Since January 20 however,  when the authoritarian government of Erodogan intensified its ongoing war on the Kurds and attacked the Afrin canton with support from Russia, and by using Syrian Arab fighters from the anti-Assad  Free Syrian Army and the Islamic fundamentalist forces,   the PYD leadership has openly asked the Assad regime to come to its aid.  On February 22,  following a meeting between Saban Hamo,  a leader of the Kurdish People’s Protection Units (YPG) and Russian and Syrian government officials,  and with the backing of Iran,  Syrian regime militias swept into Afrin.   https://www.nytimes.com/2018/02/22/world/middleeast/syria-afrin-kurds-ypg.html?rref=collection%2Fissuecollection%2Ftodays-new-york-times

How could a butcher regime which is currently engaged in decimating the people of Eastern Ghouta and has been responsible,  for the past seven years, for the murder of half a million mostly innocent civilians, be called upon to “save” the Kurdish masses?    This is also a regime with  extreme Arab nationalist and racist policies toward the Kurds, some of whom were not even recognized as  Syrian citizens until 2011.

The Syrian regime might negotiate a deal with the Erdogan government and Russia,  and  gain full and official control of the Rojava region and hence temporarily stop the Turkish ground and aerial attacks on Afrin.  However, the  PYD’s deal with the Assad regime will only exchange one brutal assault with another.  What called itself the autonomous region of Rojava can no longer continue under these conditions.

Two years ago,  when the Alliance of Syrian and Iranian Socialists was formed,  its founding statement of principles stated the following:  “While we insist on upholding a principled position of support for the Kurdish national liberation movement and its struggle for self-determination in Iraq, Syria, Turkey and Iran, we think it is also necessary to challenge many of those on the left who separate the struggle for self-determination of the Kurdish people in Syria from the dynamics of the Syrian revolution.  It was the 2011 Syrian revolution that made it possible for the autonomous cantons in Rojava to come into existence.  Without a Syrian revolution there can be no democratic Rojava.  . . .  The liberation and emancipation of the Kurdish people is linked to the liberation and emancipation of the people of the region.”

This statement is more true than ever.   The victory of the Assad regime and its allies in Eastern Ghouta is a major defeat not only for the Syrian Arab revolutionaries but also for the Kurds, all other ethnicities in Syria, and all those fighting racism and capitalist authoritarianism around the world.

Also see the January 24, 2018 statement of the Alliance of Middle Eastern Socialists

Solidarity with Afrin, al-Ghouta, Idlib Against All Military Attacks

Link to the Spanish translation of the article which you just read: