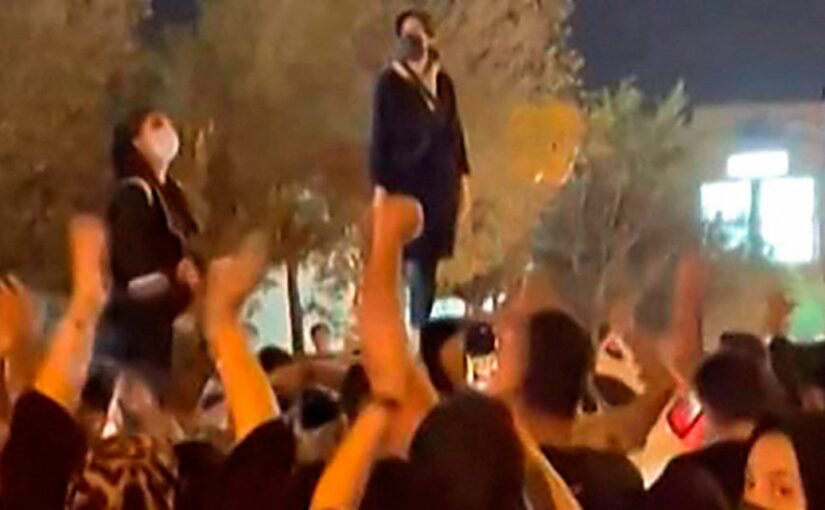 Below is my opinion piece,  published in Truthout October 1, 2022.

The current popular protests in Iran against the compulsory hijab and state violence are being led by young women and capturing the attention of the world. Masses of women have come out throughout the country to burn their hijabs. They are chanting, “Our hijab will be the noose around your neck,” and have called for an end to the Iranian regime, specifying that they want “neither monarchy, nor clergy.” Young women are leading the protests, joined by young men and people of all ages, including some women who wear the hijab but believe that it has to be a matter of choice, not compulsory. For many Iranian women, the struggle against the compulsory hijab is both about the right to bodily autonomy and about the struggle against gender violence, which cannot be separated from state violence.

The protests were ignited in response to the police murder of Mahsa Amini, a young Iranian Kurdish woman whose family asserts she was arrested and beaten for her “improper hijab.” Within a few days, localized protests transformed into nationwide protests.

The last time Iran saw large protests centered on women’s rights was after the 1979 Revolution, when several hundred thousand women came out on March 8, International Women’s Day, to oppose the imposition of the mandatory hijab and the takeover of the revolution by Islamic fundamentalist forces. At that time, the women’s protests were silenced by fundamentalists and even by most leftist forces. The fundamentalist forces used brute force and most leftists told women that demanding women’s rights would “divert” the revolution from its opposition to U.S. imperialism.

Iranian feminist attorney Nasrin Sotoudeh has connected the Iranian women’s struggle against the compulsory hijab and gender violence to the struggle of U.S. women for abortion and reproductive rights. She was one of the first to issue a statement of solidarity with U.S. women after the U.S. Supreme Court decision on June 24 took away women’s federal right to abortion. She wrote:

In these difficult times, when the women’s movement in the United States is facing assault and the right to abortion has been radically restricted, I wish to stand by you and declare my support from our corner of the world.… After the 1979 Iranian Revolution, new laws that drastically stripped women and girls of their rights were part of an insidious larger effort to limit civil liberties for everyone. As someone who lived through (and campaigned against) this loss of freedom and democracy, I can offer a warning: It will not end with this Supreme Court decision on abortion. Women in Iran continue to face laws that restrict rights over our bodies, and even over the ability to think for ourselves.

In the most immediate way, the experiences of Iranian women since the transformation of the 1979 Revolution into an authoritarian theocracy can offer important lessons for women in the U.S. If we in the U.S. do not dissent en masse in opposition to authoritarianism, and in defense of abortion and reproductive rights, we will lose many more of our rights and could see the coming to power of more religious fundamentalist, misogynist and openly racist officials.

Iranian women can also learn much from the experiences of U.S. women. They can learn from the ways in which Black feminist organizations such as Sister Song have brought together the struggles for reproductive justice and against class, racial, gender exploitation, gender violence, state violence and mass incarceration in the U.S. Black women in the U.S. experience these forms of injustice in an intertwined way, and activists have highlighted and organized in ways that recognize these intersectionalities.

Thus, Black feminist intersectionality (a term coined by feminist legal scholar Kimberle Crenshaw) defines self-determination as a struggle challenging the intertwining of capitalist commodification of women’s bodies, racism and patriarchy. Poet/writer/activist Audre Lorde; writer-activists Barbara Smith, Beverly Smith and Demita Frazier, authors of the Combahee River Collective Statement; as well as Tarana Burke, founder of the #MeToo movement, have all demanded social transformation both at the structural and the personal level. Black feminist abolitionist thinkers such as Mariame Kaba and Romarilyn Ralston call for addressing the intertwining of gender violence and state violence, urging us to reject carceral solutions and instead work to build a society in which injustices and root causes of violence are addressed, and conditions are created for the flourishing of all.

Iranian feminists have also engaged significantly in anti-prison activism. For example, feminist activist and writer Narges Mohammadihas been imprisoned for years for her campaign against the death penalty, and has published a two-volume collection of interviews on solitary confinement while in prison. She opposes Iran’s carceral system, which has nearly 200,000 prisoners, and she especially opposes solitary confinement as a global form of torture which has severely damaging effects.

If the struggles of women in Iran and in the U.S. come together and promote dialogue on what we have in common and what we can learn from each other, women in both countries will be empowered to confront — and perhaps reverse — the growing authoritarianism that is suffocating us all.

This article was originally published by Truthout on October 1, 2022