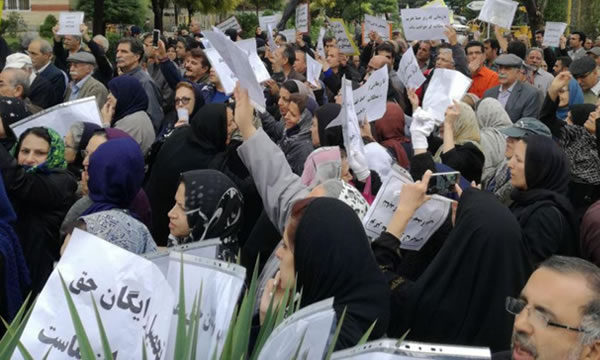 At a time when the Trump administration is increasing sanctions and war threats against Iran,  a wave of teachers’ protests in the U.S. and Iran can create the possibility for international labor solidarity instead of militarist ideological brainwashing.  In this article,  I would like to offer  some details about the teachers’ protests in both countries,  ask what they have in common  and how U.S. teachers can learn from Iranian teachers’ demands.

On May 10, teachers’ protests in Iran reached a new height.   Throughout Iran,  teachers gathered  in front of the Ministry of Planning (inTehran) and offices of the Ministry of Education and Development (in 12 other cities) to express their demands.   They protested poverty wages, lack of funds for education,  now fee-based government educational services, demanded freedom for imprisoned teachers,  an end to repression.  One of their slogans was  “Bread, Work, Freedom,  Teaching Liberation.”  Their public statement included demands such as the right to form independent and free unions,  an end to discrimination and violence.

In Tehran,  the currently employed  and retired teachers (women and men) were attacked by security police and viciously beaten.  15 were arrested of whom most were subsequently released on heavy bails.  Others remain in prison where they have joined leaders of the Iranian Teachers’ Association,  Mahmoud Beheshti Langeroodi, Mohammad Habibi, and Esmail Abdi.  Abdi, the former general secretary of the Iranian Teachers’ Association is currently on hunger strike to challenge his prison sentence on charges of  “propaganda against the state” and “collusion against national security.”

In a letter which Abdi had written from prison on  March 21, 2018 he had addressed Iran’s one million teachers as well as international human rights and labor rights organizations, and  recalled  the promises that the 1979 Iranian revolution gave the masses but did not bring about:

“This is the 40th Nowruz [Iranian New Year’s day] since the revolution; a revolution that took place in 1979 with the promise of ending dictatorship, establishing democracy, implementing transparency and preventing the accumulation of wealth in the hands of a particular class; a revolution that the clerics and some political groups said would be a harbinger of peace and freedom and put an end to poverty and discrimination, where people would have access to free water and electricity and enjoy such rights as freedom of thought and expression, free and equal education, with the right to form organizations and unions, hold protests and strikes, assemble and rally and be equal against the law.  But these aspirations did not amount to anything besides slogans. The blessings of the revolution benefitted not the poor but rather the rich, the powerful and tricksters. The groups that came to power used the state media to promise a better and more dignified life. They took advantage of the people’s beliefs and values to attract votes while amassing wealth from the nation’s treasury and now we see competing factions trying to expose each other.”  ( https://www.iranhumanrights.org/2018/04/teachers-rights-advocate-writes-scathing-letter-from-prison-on-revolutionary-irans-failed-promises/)

As we see in Abdi’s letter and the latest protests,  many  Iranian teachers demand an end to  poverty, discrimination and  call for free, liberatory  and quality education  for all without class, gender, ethnic and religious discrimination.

While the teachers’ protests in Iran are in some ways different from the teacher walkouts in the U.S.,  they  have some demands in common.

The wave of teacher walkouts (strikes)  and protests that began in the U.S. in February in West Virginia and spread to Arizona,  Colorado, Oklahoma, Kentucky, Puerto Rico and now North Carolina has opposed  poverty wages,  rising health care costs, inadequate or non-existent pensions and lack of union representation in  non-union “right to work states.”

In Oklahoma,  teachers openly spoke of how they were being  compelled to sell their blood plasma or take second jobs as luggage handlers and Uber drivers in order to make ends meet.  (New York Times, March 21, 2018)

In Puerto Rico, teachers have been fighting to keep the island’s public schools open in the wake of the devastating Hurricane Maria and government efforts to give public school funds to charter (private) schools.  (http://www.labornotes.org/2018/05/puerto-rico-teacher-uprising-media-ignoring )

In most of  the states where walkouts and protests have taken place,  teachers (mostly women) have not only demanded better pay and benefits for themselves and support staff  but more funding for education and a higher quality of education.  They have opposed “businesslike approaches to managing schools”  such as the growing use of standardized testing to evaluate student learning,  and the greater use of merit pay on the basis of the quantitative results of standardized tests rather than quality of teaching.  In short, teachers feel like “cogs in corporate machines.”  (New York Times, March 26, 2018)

Furthermore, most of  these strikes and protests have been taking place in what have become known as  “Red states” where the majority of those who voted in the 2016 presidential election, voted for Donald Trump.  Yet,  teachers have been  challenging the results of the policy of tax cuts which Trump champions.   Most also oppose gun violence in schools and Trump’s proposal to arm teachers.

One lesson that U.S. teachers can learn from the current wave of  Iranian teachers’ protests is the recognition that  demands for a dignified life for teachers cannot be separated from questioning exploitation, discrimination and militarism in society as a whole.

At a time when the Trump administration has begun to reimpose back-breaking sanctions on Iranians and threatens Iran with a direct war,  it is essential for  U.S. teachers and  Iranian teachers who oppose exploitation, discrimination and militarism to reach out to each other.