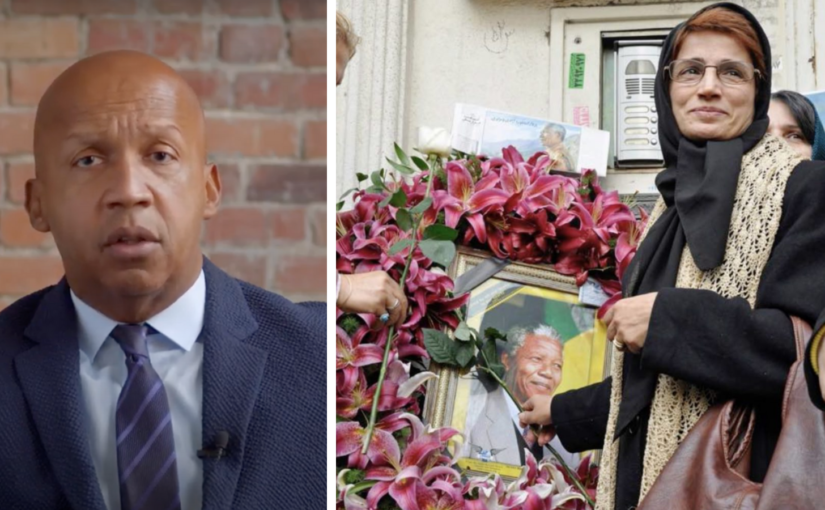 Bryan Stevenson and Nasrin Sotoudeh are both human rights attorneys who have dedicated their lives to “helping the poor, the incarcerated and the condemned.” They both received the 2020 Alternative Nobel Prize, also known as the Right Livelihood Award.

Two fascinating documentaries about them, Nasrin (2020) and True Justice (2020) can give international viewers important insights into how they challenged hate and promoted justice.

In True Justice, Stevenson who has been a public interest attorney since 1986 and has represented inmates on death row, argues that in the United States, “we live in a post-genocide society.” The genocide of Native Americans and the enslavement of Africans, he argues, was justified by presenting them as inferior or subhuman. This view of the Other as inferior, he insists, can only be overcome if the U.S. population confronts and reflects on its history of slavery, lynchings, segregation and the present system of mass incarceration which disproportionately affects Black people and people of color.

Stevenson emphasizes that “until we tell the truth, we deny ourselves the opportunity for justice and redemption.” It is only through a process of “transitional justice” in which specific steps are taken to reverse and repair the damages done, that reconciliation can be achieved. This process, he argues, begins with confronting the ideology of white supremacy in which “a Black person is viewed as a criminal.” The process of transitional justice also requires challenging any form of “otherizing and demonizing” of other Others, including the Asians or the Latinos.  Stevenson has “no interest in punishment. My interest is in liberation;” which cannot be achieved if we remain silent.

Viewers of the True Justice documentary, can see how Stevenson has tried to promote a process of “truth and reconciliation” by establishing two museums in Montgomery Alabama:  The National Memorial for Peace and Justice honors each of the more than 4000 African Americans lynched in the 12 states of the South From 1877 to 1950.  The Legacy Museum divides U.S. history into four eras: Slavery, Lynching, Segregation, and Mass Incarceration.

Stevenson’s book, Just Mercy: A Story of Justice and Redemption also tells the story of his Equal Justice Initiative in Montgomery Alabama, and their ultimately successful efforts to win the exoneration of Walter McMillan, an African American man who was wrongfully convicted of killing a white woman and sentenced to death. This book was made into a highly acclaimed feature film with the same name in 2020.

Nasrin (2020), a documentary about the Iranian feminist human rights attorney, Nasrin Sotoudeh, (based on footage taken by human rights activists inside Iran and smuggled outside) shows commonality in goals and values between Sotoudeh and Stevenson. Sotoudeh has defended in the past and continues to defend abused children and women, youth on death row, journalists, and members of the banned Baha’i faith, a peaceful religious minority, and women’s rights activists like Shirin Ebadi, winner of the 2003 Nobel Peace Prize.

She has challenged laws that treat women as inferior or equivalent to half a man.  In her view, the dehumanization of women in Iranian society contributes to moral degradation and prevents progress for society as a whole. At the same time, by defending women’s rights activists and persecuted religious minorities, she has tried to take steps toward confronting a history of discrimination against women and minorities in Iran.

Sotoudeh has been in and out of prison since 2010 and is currently serving a 38-year sentence for defending women who have removed their headscarves in public. Like her clients, she opposes the compulsory hijab and believes that wearing or not wearing the hijab should be a matter of personal choice, not dictated by the state or any institution.

While she has not had the opportunity to establish museums or write a book, Sotoudeh has written various letters from prison in which she has expressed her commitment to confronting any form of dehumanization. She has also suffered a great deal from various hunger strikes she has gone on to protest and from being infected with COVID-19.

We wanted to tell Nasrin Sotoudeh’s story because she embodies a commitment to democracy, justice, and political courage; the power of women to shape society; and a deep conviction that people of all faiths and backgrounds deserve equal opportunity and protection. She is also a fierce, funny, and resilient individual, supported at home and in her work by her loving husband, and she has repeatedly put herself at risk to serve others. As we were filming, Nasrin was arrested in June 2018. . .Nasrin has become an international symbol of human rights, resistance, and hope.

I hope readers will view the above documentaries and share their own thoughts about what we can learn from Stevenson and Sotoudeh.

This article was originally published on May 5, 2021 by Zamaneh,  an Iranian human rights site and radio station based in Holland.