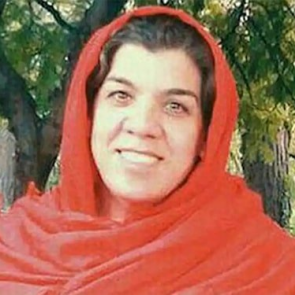 Parvin Mohammadi needs support from labor activists and feminist activists around the world. During all these years of struggle, she has never separated the labor struggle from women’s struggles for their rights.

On December 21, 2020, the Iranian government sentenced Parvin Mohammadi, in absentia, to a year in prison on charges of “sedition.” She has refused to go to prison, continues to challenge the authorities, and has now gone into hiding.

Parvin Mohammadi was born in 1961 in a working class family. After graduating from high school, she was not able to attend university because she needed to work to support her family. This was the period shortly after the 1979 Iranian Revolution. She was hired as a worker by the Melli Shoe Company which had been expropriated by the Islamic Republic’s Mostazefan Foundation (a parastatal entity). In the Winter of 1981, when workers at the Melli Shoe Company went on strike, she became a strike leader. After some workers were arrested and other workers occupied the factory, the state used tanks to take back the factory from the workers. They were severely punished and Mohammadi was expelled.

She then became a teacher at a state-owned daycare center. After three years of working at the daycare center, she was fired for protesting low wages and lack of benefits. Subsequently she took up different jobs in various small factories.

In 1991, she was hired by a steel factory. After seven years, she was elected by the company’s 2000 workers as their labor representative. She helped organize labor protests against low wages and the transfer of the company from the state to parastatal contractors which offered no benefits. Following the widespread arrests of workers by the state, Mohammadi took their protest to the parliament and to the national inspectors. The Martyrs’ Foundation, a parastatal organization with strong monopolistic privileges, took charge of the factory. It falsely declared bankruptcy in order to close the factory and sell its expensive land. Workers protested against the closure. They abducted the chief executive officers and held him captive in the factory for three days. After intervention by the police and the judiciary, the Martyrs’ Foundation was forced to re-open the factory, and workers returned to work. Although the state security police interrogated and attempted to expel Mohammadi for organizing labor protests, she was not fired because she was very popular among workers.

In 2009, Mohammadi who was still working in the steel factory, met the Free Union of Iranian Workers, and extended her labor activities to the national level. This was the year of the Green Movement against a fraudulent presidential election. It was also a year of labor strikes. Once again, she was summoned by the security police and faced charges in the “Revolutionary Court” where she was regularly interrogated.

In 2010, she organized the collection of 40,000 signatures from workers for a labor petition against low wages and for an end to contract work/temporary work. After collecting the signatures, she submitted the petition to the parliament, the office of the president, and the office of “the supreme leader”, Ayatollah Khamenei.  Given the lack of response from these institutions, the Free Union of Iranian Workers issued a call to workers to gather in front of the ministry of labor on International Workers’ Day, May 1, 2010. Three days before this gathering , Mohammadi was summoned by the security police again. She was told that if she participated in the gathering, she would be subject to legal action and that previous charges against her would be re-activated. She retired. The steel factory where she worked was closed and the managers sold the land.

In January 2011, she was elected as vice president of the board of directors of the Free Union of Iranian Workers, a post which she continues to hold to this day. Immediately after her retirement, Mohammadi and a few others, founded the Organization of Retirees of the Social Security Department. This organization is not affiliated with any government and is completely independent. It defends the rights of retirees, and exposes corruption and extortion in the Social Security Department, especially after the notorious judge, Said Mortazavi, was appointed its chief executive officer. There have been extensive protests by this organization against massive corruption in the social security department, and widespread outreach to retirees nationwide.

From 1991 to 2019, Mohammadi has been regularly summoned by the security police and interrogated. In the Winter of 2019, she was arrested along with Jafar Azimzadeh, president of the Free Union of Iranian Workers, and sent to the Criminal Investigation Department’s jail where both were held for two weeks without minimal health standards. Every day, she was blindfolded, taken to another location, interrogated and returned to the jail. After two weeks she was released on bail. Jafar Azimzadeh was imprisoned on charges of “sedition” at the Evin Prison in Tehran. He was sentenced to five years imprisonment and has not had even one day of furlough since his arrest.

In December 2019, Mohammadi was forced to report to the Kachui prison for a one-year prison term. With the spread of COVID-19 in February 2020, she was temporarily released and was later subject to release on parole. However, she was continually harassed by the police. On December 21, 2020, without having received a summons, she was sentenced in absentia to a year in prison on charges of “sedition.” A text message was sent to her phone, requesting that she report to prison. She has since gone into hiding.

Parvin Mohammadi needs support from labor activists and feminist activists around the world. During all these years of struggle, she has never separated the labor struggle from women’s struggles for their rights. Women workers continue to fight for both and Mohammadi continues to emphasize that labor rights and political rights are intertwined.  There are also currently two other women members of the Free Union of Iranian workers who have each received five-year prison sentences. They are Nahid Khodajoo, Nasrin Javadi Khezri.

If you want to help defend Mohammadi and other Iranian women labor leaders, you can start by sharing or reprinting this article and sending letters to the International Labor Organization at [email protected].

This article was based on an oral biography of Parvin Mohammadi as recounted by herself and transcribed by an anonymous friend.

This article was originally published by New Politics journal on January 21, 2021.