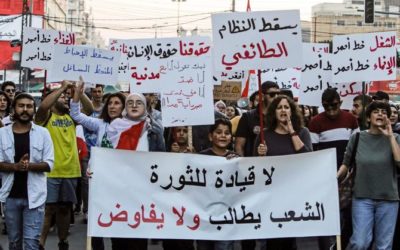 Of the countries in the MENA region that experienced popular uprisings in 2019,  the situation of Lebanon and Iran stands out as the most catastrophic now.

The August 4 explosion at a warehouse  containing  2750 metric tons of ammonium nitrate at the port of Beirut was equivalent in strength  to one tenth the atomic bomb dropped on Hiroshima 75 years ago.    It has killed almost 200 people,  injured thousands and left over 300,000 homeless.  It has laid bare the complete collapse of Lebanese society which was already on the verge of collapse from a neoliberal capitalist government beholden both to the International Monetary Fund (IMF)  and partially controlled by the Iranian-backed Hezbollah.

In Iran,  during the months of June & July,  over 20  fires and explosions  damaged a variety of sites,  ranging from the Natanz nuclear fuel production site to Parchin,  a military and weapons development base,   various power plants,  production plants,  the state television and radio station,  the Evin prison,  a medical clinic,  several markets, forests and historical sites.  The New York Times reports that Israel was responsible for planting the bomb that caused the explosion at the Natanz nuclear fuel production plant which in turn set back Iran’s nuclear program.  However,  it is not clear whether all the explosions and fires that have taken place during the past month can be attributed to acts of sabotage by foreign governments.   No reports have also been issued about the dangerous radioactivity released by the Natanz explosion and the damage done to the public.

In Lebanon,  over 50% of the population lives under the poverty line.  Over 40% of the labor force is unemployed.   The COVID-19 pandemic is growing,   water is undrinkable, refugees from Syria live in squalor and the Kafala system of slavery binding migrant workers is continuing with impunity.

In Iran,  people continue to suffer from the  brutality, repression and authoritarian rule of the Iranian regime as well as severe U.S. sanctions,   deep economic crises and the worsening COVID-19 pandemic.   The value of the Iranian Toman continues to decline severely from one day to the next.  The majority of the population lives in poverty and  does not have enough to eat much less to  pay rent.

In Lebanon,  the popular protests demanding an end to the corrupt government are  calling for revolution.    In Iran,  last week saw the largest wave of nationwide labor protests in 40 years and the protests have concentrated in the critically important  oil and gas sector.   Strikers also include teachers, nurses and municipal workers.

In both Lebanon and Iran,    feminist activists are  fighting against  femicide,  honor killings,  sexual assault and rape.   Last December,  Lebanese women creatively adapted and performed the Chilean women’s song  “against the rapist state”.  In Iran,  women who removed their headscarves in public to oppose the compulsory hijab,  and  women who have been organizing against the death penalty, for women’s rights, children’s rights or the rights of oppressed minorities are now in prison and face long sentences.     Kurdish  activists in prison are being executed and youth who participated in the December 2017 and  November 2019 uprisings against poverty, repression and militarism  and  the January 2020 protests against the government’s  downing of a passenger plane have received death sentences.

It is not enough to speak out against the corruption of the Lebanese and the Iranian governments and demand efficient management.  It is not enough to speak out against privatization.  It is not even enough to expose these states as exploitative capitalist and authoritarian.   It is evident  that  Iran’s militarized and religious fundamentalist  state capitalism plays an important role in promoting the suffering of the people in the region,  including Syria,  Iraq, Lebanon and Yemen.     Lebanon,  despite being perceived as a “democracy’,  has been very quickly entrenching the authoritarian aspect of its regime through state and militia crackdowns.

While acknowledging this reality,  what we need , are active forms of solidarity between the current mass protests in Lebanon and the labor struggles in Iran.  We also need active solidarity between feminist activists in both countries.   Our respective struggles need to clearly spell out radical goals that go beyond simply opposing the current political system.  We need to explicitly state that without a fundamental transformation in labor conditions,  without ending the dehumanization of women,   without ending the Kafala system in its variety of forms,  without ending anti-Black racism, without ending  discrimination against Kurds and other oppressed minorities including sexual minorities,  and without preserving and detoxifying our environment,  we will not move forward.

As the Alliance of MENA Socialists,  we believe that such an effort is not possible without a type of socialism that promotes critical thinking, dialectical reasoning and reflection in search of affirmative solutions.   We are here to promote and facilitate the type of regional and global solidarity that can help the people of the region.