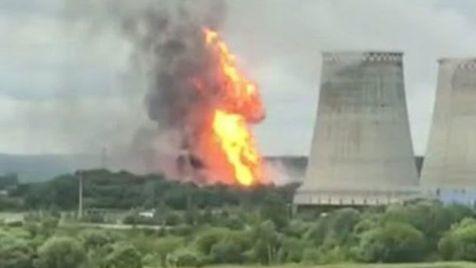 During the past month,  over 20  fires and explosions have damaged a variety of sites in Iran,  ranging from the Natanz nuclear fuel production site to Parchin,  a military and weapons development base,   various power plants,  production plants,  the state television and radio station,  the Evin prison,  a medical clinic,  several markets, forests and historical sites.

The New York Times reports that Israel was responsible for planting the bomb that caused the explosion at the Natanz nuclear fuel production plant which in turn set back Iran’s nuclear program.  However,  it is not clear whether all the explosions and fires that have taken place during the past month can be attributed to acts of sabotage by foreign governments.   No reports have also been issued about the dangerous radioactivity released by the Natanz explosion and the damage done to the public.

The Iranian people continue to suffer from the  brutality, repression and authoritarian rule of the Iranian regime as well as severe U.S. sanctions,  a deep economic crises and the worsening COVID-19 pandemic.   The value of the Iranian Toman continues to decline severely from one day to the next.  The majority of the population does not have enough to eat much less to  pay rent.

The Iranian  government claims that over 250,000 people have contracted COVID-19 and over 12,000 have died.  Some  government officials estimate that at least 18 million or a quarter of the population have been infected by the virus.   Government officials hid the rise of the epidemic in Iran in February and then refused to follow the proper protocols for preventing the virus from spreading much less providing the population with basic food and healthcare needs.  Instead they continue to pour billions into Iran’s nuclear and missile programs and its military and political interventions in Syria, Iraq, Lebanon and Yemen.

In the meantime,  the  COVID-19 pandemic  and the global economic crisis is being used by the Iranian government as an opportunity for further internal repression.   More and more progressive and radical youth, labor activists, women and national minorities who have been involved in protests or who have expressed their opposition to the regime in articles or social media posts are being arrested and are receiving heavy sentences.

More Kurdish political prisoners have been executed since March.  Three youth involved in the November 2019 uprising have been sentenced to death.   Others involved in that uprising and the January 2020 protests against Iran’s missile attack on a passenger plane which killed all 175 passengers,  have also received long prison sentences.   At least seven thousand  mostly youth arrested during the November 2019 uprising and various long-term political prisoners are still detained or imprisoned.

Iranian feminist and environmental activist,  Atena Daemi has received a two-year prison sentence which includes 75 lashes.    Other feminist activists such as Golrokh Iraee,  Kurdish women’s rights activist Zeynab Jalalian,  human rights activist Narges Mohmammadi,  and feminist attorney, Nasrin Sotudeh languish in prison.  Several of the young activists known as Girls of Revolution Avenue who took off their headscarves and stood on top of electrical posts to oppose the compulsory hijab  in 2018,  have received long prison sentences.  Young journalist and labor activist,  Sepideh Gholian was sent back to prison for refusing to sign a statement to apologize to  the “Great Leader,” Ayatollah Khamenei.  Some feminist men such as Arash Sadeghi and Soheil Arabi are also in prison for having defended women’s rights activists.

Workers, and labor activists such as Jafar Azimzadeh and various leaders of the Teachers’ Union continue to suffer in prison for having organized strikes and demanding a free and open-minded education.

In the meantime, many  labor strikes demanding back pay and safe working conditions continue in various cities, most notably at the Haft Tapeh sugar cane factory.  40 AzarAb Industries workers in City of Arak were each sentenced  to one year in prison, 74 lashes, and one month of forced labor after protesting against the delays in payment of their wages, job insecurity and the “privatization” of the company. The uproar in the country and in social media and strong condemnation by international labor organizations forced the Iranian government to “reconsider the verdict.”

Unfortunately an equally powerful expression of domestic and international outrage did not result when a fourteen-year old Romina  Ashrafi was hacked to death by her father in an honor killing last month.    Honor killings are still legal in Iran and girls as young as 13 can legally be married if their male guardian agrees.

Recently Javad Zarif admitted the existence of a  September 2019  agreement with China which offers Iran a $400 billion initial  investment in oil, gas and other infrastructure development, and 5,000 Chinese security forces to protect Chinese investments in exchange for Iranian oil, gas and petrochemicals at a 30% discount. This agreement which involves additional Chinese investments every five years, commits both parties for 25 years and offers ways to circumvent the U.S. sanctions.     While details of similar agreements with Russia have not been published,  Russia  and Iran have long ago signed agreements which allow Russia to build and maintain Iran’s nuclear plants.   Both China and Russia also sell large amounts of arms to Iran.

Those international socialists who remain silent about the murderous history and present  of the Iranian regime and consider it an anti-imperialist power,  ignore not only its brutality toward its own people but also its collusion with Chinese and Russian imperialism.

Center for Human Rights in Iran.  “Gunning Them Down: State Violene Against Protesters in Iran.”   May 28, 2020.  https://iranhumanrights.org/wp-content/uploads/Iran-Human-Rights-November-2019-January-2020-Protests.pdf

International Alliance in Support of Workers in Iran.  “Flogging and imprisonment sentences for workers of AzarAb Industries annulled.”www.workers-iran.org,  July 5, 2020. https://workers-iran.org/flogging-and-imprisonment-sentences-for-workers-of-azarab-industries-annulled/

This article was originally published on the website of the Alliance of Middle Eastern and North African Socialists on July 11, 2020