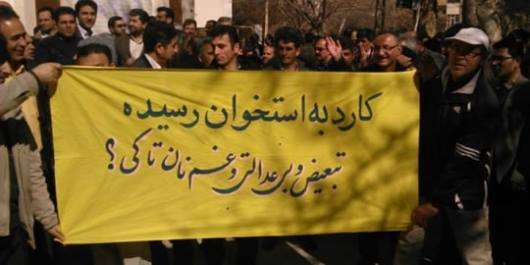 Currently, the military interventions of the Islamic Republic in the region and especially in Syria have become so deadly, and the possibility of military attacks from the United States, Israel and Saudi Arabia against Iran have increased so much,  that the Iranian labor movement cannot take a step forward without declaring its open opposition to the militarism of the Iranian state and all these states.

We the members of  the Alliance of  Middle Eastern Socialists wish to express our support for your activities, the labor strikes and protests currently taking place throughout Iran, the protests of the Daughters of Revolution Avenue, the struggles of all oppressed women in Iran, and the protests of farmers, teachers, nurses, students, political prisoners, retirees and the unemployed.

The wave of popular protests that began on December 28, 2017 against militarism, authoritarianism, poverty, repression and injustice has attracted the attention of the world. Those young people who previously constituted the mass base of the Islamic Republic expressed their opposition to the military interventions of this regime in Syria, Lebanon,  Iraq, Yemen, and openly targeted the link between militarism , poverty, discrimination and injustice. The continuation of these popular demonstrations in the form of strikes and labor protests, the protest actions of the Daughters of Revolution Avenue and the protests against environmental pollution, gave many the hope that the link between militarism, poverty and discrimination would be raised more and more.

Now,  at a time when the governments of the United States,  Israel  and Saudi Arabia are intensifying their war threats against Iran,  your unions can play a vital role in expressing opposition to the militarism of the Iranian state and of all the above mentioned oppressive states.

Recently Ms. Parvin Mohammadi, a leader of the Free Union of Iranian Workers had written the following in the union’s website to protest the way in which the minimum wage is determined by the Iranian government:    “Your long negotiations will only bring about death for us. For hours you argue behind closed doors about how to announce a figure that would keep workers’ families in poverty and wretchedness for another year. You provide minute by minute media coverage of this spectacle. You stay up until 4am and have meeting after meeting to make us believe that the real representatives of the workers are bargaining with the main employers, and to make us accept that in this fight to determine the minimum wage, the government plays the role of mediator between the workers and employers. However in fact, the government represents 80 percent of the capital investment in the nation and is itself the main employer in Iran.”  Ms. Mohammadi concluded: “Gentlemen of the high labor council, for forty years you plundered us and granted working class families, poverty, suicide, unemployment, organ selling, homelessness and …. So many of our youth lost their lives because of illness, malnutrition, lost dreams and … We suffered humiliation in the eyes of our loved-ones each month because of our low wages. You destroyed a generation and will not give up. Are you not ashamed that when you calculate the cost of a family’s basket of goods and services, one which is the lowest for surviving in this hell which you have created, you gather for hours behind closed doors to find a way to reduce even this minimum, near-death level of subsistence?!!!  Shame on you. We will not let you continue this cycle. We will not stop until we gain what is rightfully ours.”

We the members of the Alliance Middle Eastern Socialists, share Ms. Mohammadi’s anger.  What also needs to be said is that large portions of the plunder have been spent on the military budget and for the government’s support for the Hezbollah in Lebanon, the criminal regime of Bashar Assad in Syria, Iranian militias in Iraq and the entire Middle East including Yemen.  The youth who protested in December and January, expressed this clearly:  “Leave Syria alone, and think about us.”

The fact is that capitalism whether corrupt and inefficient or efficient,  is a system based on exploiting the working class.  Militarism is an inseparable part of capitalism.  Currently, the military interventions of the Islamic Republic in the region and especially in Syria have become so deadly, and the possibility of military attacks from the United States, Israel and Saudi Arabia against Iran have increased so much,  that the Iranian labor movement cannot take a step forward without declaring its open opposition to the militarism of the Iranian state and all these states.

During the past few years,  the Islamic Republic has claimed that it entered Syria and increased its military presence in Iraq and other places in Middle East in order to fight ISIS. The fact is that the military intervention of the Iranian government in the region has itself been one of the factors leading to the growth of Sunni fundamentalism and Jihadism in the form of ISIS. The death machine of the Assad regime and its chemical attacks which have continued with the support of the Iranian and Russian governments,  have destroyed the labor and democratic struggles that arose in Syria in 2011 in a popular insurrection.

We agree with the new year (Nowruz) statement of the Free Union  of Iranian Workers which states: “the quality and quantity of the strikes and protest gatherings of us workers throughout the nation,  and the ceaseless struggles of the workers of Ahvaz Steel, HEPCO, Azarab, Haft Tapeh Sugar Cane, and many other production and industrial facilities for their demands have been different from previous years and have embodied valuable experiences which in  the new year, will no doubt have a determinant impact on the growth of working class struggles for freeing ourselves from the current hellish conditions.”

We hope that the coming year will demonstrate the ever-increasing quality and quantity of labor struggles. Opposition to militarism is a moral responsibility, an economic need for improving the material conditions of the Iranian working class, and a way to oppose domestic state repression. The Alliance of Middle Eastern Socialists hope to extend a hand of solidarity to you by providing you with links to the struggles of labor, women and oppressed minorities in other parts of Middle East and other countries of the world.

Our destinies are linked.