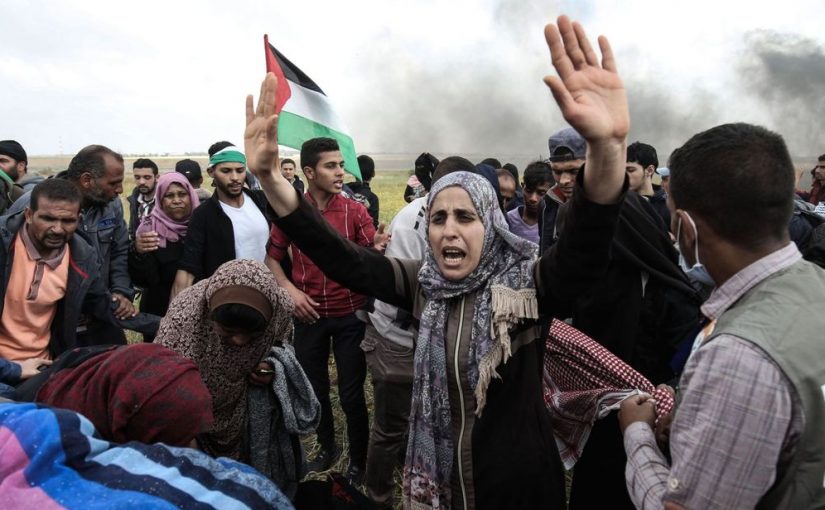 These are not “confrontations” or “clashes” as the mainstream media and Western governments are saying. We are dealing with the deliberate crimes of an occupying, colonial and racist force against unarmed protesters.

To date,  there have been four mass rallies as part of the Great March of Return series of protests by Palestinians that began on  March 30, 2018.  Each protest has been met with deadly force by the Israeli military, which has murdered 40 Palestinians in Gaza since 30 March. Thirty-one of those killed, including four children and a journalist, were fatally wounded during protests. More than 1,600 other Palestinians have been shot with live ammunition that has caused what doctors are calling “horrific injuries” likely to leave many of them with permanent disabilities. At the same time, no death occurred on the side of the Israeli occupier.

Videos show unarmed Palestinians fleeing Israeli occupation forces during protests and being shot in the head by Israeli snipers. In a radio interview for example, an Israeli Brigadier-General (Reserve) Zvika Fogel actually confirmed that when snipers stationed along Israel’s boundary with Gaza shoot at children, they are doing so deliberately, under clear and specific orders.

Right of Return for Palestinians

The demonstrations organized since March 30, on the occasion of the celebration of Land Day, commemorating the Israeli murder of six Palestinians in 1976 during mass demonstrations against the theft of land by the State of Israel, marked the first stage of six weeks of mobilisations for the “March of the Return”. These will last until May 15, the anniversary of the creation of the State of Israel in 1948 and the symbol for the Palestinians of the “Nakba”, the Catastrophe, during which 800,000 of about 1.4 million Palestinians at the time were forcefully displaced from their land. These mobilizations aim to claim the “right of return” of the Palestinians.

Today, the number of Palestinian refugees exceeds six million. The Gaza Strip alone has no less than 1.3 million people (out of two million inhabitants) officially registered as refugees. Yet UN General Assembly Resolution 194, adopted on December 11, 1948 (which has no binding legal value), supports the right of return of Palestinians. It states that ” “refugees wishing to return to their homes and live at peace with their neighbours should be permitted to do so at the earliest practicable date, and that compensation should be paid for the property of those choosing not to return and for loss of or damage to property which, under principles of international law or equity, should be made good by the governments or authorities responsible”.

Furthermore, there is an inhuman and illegal blockade of the occupied Gaza Strip, in violation of international law, imposed by the State of Israel, with the assistance of the Egyptian regime for more than a decade.  The blockade  has transformed  this territory into a huge prison. The asphyxiation is total: more than 80% of the inhabitants of Gaza depend on international aids. Hospitals lack medicines, and electricity is only available for a few hours a day. The water is undrinkable and  sewage is poured directly into the sea.

Complicity of the Great Powers

A draft UN Security Council statement, calling on “all parties to restraint and prevent further escalation” and calling for an investigation into the violence, has been blocked by the United States. For its part, the European Union still refuses to condemn the bloody crackdown by Israel,  whose leaders have already warned that the shooting instructions will remain the same. The deadly crackdown on these demonstrations, bringing together tens of thousands of protesters, has political objectives: to dissuade anyone from participating in similar initiatives unless they are willing to risk their lives.

It must be clear: these are not “confrontations” or “clashes” as the mainstream media and Western governments are saying. We are dealing with the deliberate crimes of an occupying, colonial and racist force against unarmed protesters.

At the same time, attacks and night raids against Palestinians in the occupied West Bank doubled in the first two months of 2018 alone. Entire Palestinian villages in northern Israel are threatened with demolition, and some have been replaced by settlements.

Israel has accused Hamas of being the instigator and organizer of the protests and using them to hide its “terrorist activities”. For its part, Hamas is attempting to politically take over these mobilizations, which were initially and still are initiated by independent and progressive activists, as it was suffering political decline and being isolated internally and externally.

Hamas’ position in Gaza has become in many respects unbearable. Subject to the blockade of Israel and Egypt on the one hand and the economic sanctions imposed by the Palestinian Authority on Gaza on the other hand,  the Islamic fundamentalist movement is under pressure from several Arab countries, including Saudi Arabia and the United Arab Emirates, which see it as an offshoot of the Muslim Brotherhood, an organization considered terrorist by these regimes.

Hamas has at the same time strengthened its relations with Iran and Turkey. Hamas officials have praised officials and governments of these countries…

70 years of Crimes Against the Palestinian People

Attacks and night raids against Palestinians in the occupied West Bank have doubled in the first two months of 2018. Entire Palestinian villages in northern Israel are threatened with demolition and some are being replaced by settlements. .

One of the main triggers for the increase in Israeli assaults and even more aggressive practices this year is the decision of US President Trump to move the US Embassy from Tel Aviv to Jerusalem. This decision, and more generally Trump’s support for Israel, encouraged the Israeli government to accelerate plans to expand settlements in the West Bank and further eradicate Palestinian identity.  This is not to mention the Saudi pressure on the Palestinian Authority to accept Israeli conditions and a political agreement in favor of Tel Aviv, in other words a form of diktat.

More generally, as we mentioned before, authoritarian regimes in the region are also guilty of bringing about the situation of Palestinians. The ruling classes of the regimes of the region are not interested in the condition of the Palestinians or in any perspective for their liberation.  However, at the same time,  they use the Palestinian to fulfil their own internal and foreign political interests. For example in Syria, the Assad regime is once again massively bombing  majority Palestinian inhabited areas, regardless of the faith of the remaining civilians. Airstrikes and shelling have hit the Yarmouk Palestinian refugee camp and al-Hajar al-Aswad area, part of a small enclave divided between jihadi fighters and other opposition armed groups south of the capital Damascus.

The apartheid, colonial and racist state of Israel must be punished for its nearly 70 years of ongoing crimes against the Palestinian people. We must continue to support the Boycott-Divestment-Sanctions (BDS) campaign as long as the State of Israel will not respect international law and Palestinian rights.

Solidarity with Palestinians and People in struggle for liberation and emancipation.