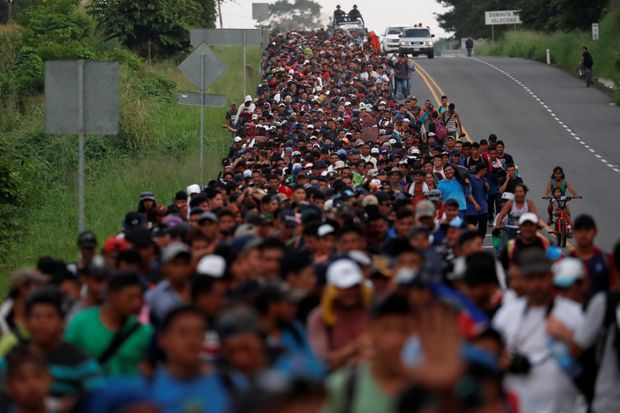 This statement was read at a Los Angeles rally in solidarity with the Latin American migrant caravan on November 3, 2018.

We, the Alliance of Middle Eastern Socialists,  express our solidarity with the caravan of migrant/refugee families and individuals who are coming to the United States border from Honduras, El Salvador and Guatemala,  fleeing poverty, violence, persecution and authoritarian regimes.   We understand their pain and suffering, their hopes and aspirations.

The current caravan of 7000 and more is in many ways similar to the caravans of millions of refugees that have fled Syria since 2015  to escape the destruction of the Syrian revolution by the criminal Assad regime,  its backers, Russia and Iran,   other imperialist powers as well as  counter-revolutionary forces such as ISIS and Al-Qaeda.   Even though the Obama administration and now the Trump administration have claimed to be opposed to  the Assad regime, they  never supported the Syrian revolution but wanted the continuation of the Assad regime with or without Assad in order to guarantee what they called “stability”  in the region.   Furthermore, in the name of bombing ISIS,   the U.S. army has killed several thousand innocent civilians in both Syria and Iraq.   As a result of attacks by the Assad regime, its allies, and all the forces mentioned, half the population of Syria or 12 million  is now either internally displaced or living as refugees in other countries.

The refugee crisis that we see today around the world is the largest since World War II.  It encompasses not only Middle Easterners and Latin Americans but also Africans fleeing poverty, persecution,  war,  and  South and East Asians,  especially Rohingya Muslims,  who have been the victims of a campaign of genocide by the Myanmar military government.

In all these cases,  we see refugees being dehumanized and treated as “the other” and the enemy.

The real enemy and the main cause of the growing refugee crisis however is capitalism and its system of oppression  which promotes exploitation, injustice, inequality, alienation,  war,  and uses racism, Islamophobia, patriarchy, sexism,  homophobia, and anti-Semitism  to prevent the majority suffering from the ills of capitalism from coming together and creating a humanist alternative to capitalism.

We Middle Eastern and Latin American socialists have to admit that the so-called anti- U.S. imperialist governments, but in reality authoritarian and capitalist states in Latin America and the Middle East, are  part of the problem.   They have used an anti-imperialist language to cover over their exploitation of the masses.

In the U.S., Trump uses the language of opposition to free trade and globalization to demonize workers in other countries who are coming here as refugees and in search of a better life.   How can we challenge this?

Socialists need to clarify that opposing neoliberalism as a form of capitalism  does not mean opposing the free movement of peoples across borders.  In order to oppose capitalist globalization, an exploitative and oppressive system,  we need to reach out to refugees and migrants fleeing poverty and injustice.  We need to develop international networks of communication and solidarity to challenge the dehumanization and alienation that is at the root of capitalism and its system of oppression,  whether private or state based.

Faced with the current simultaneous attacks on Blacks, Latinos, women, gays, lesbians, transgender people,  Muslims and Jews,  we cannot separate the struggles against racism, white supremacy, neofascism,  sexism, homophobia, Islamophobia and anti-Semitism  from the struggle against capitalism and vice versa.

We Middle Eastern and Latin American socialists need each other in that effort.  As part of that effort, we express our solidarity with our sisters and brothers in the migrant caravan.

This statement was originally published by the Alliance of Middle Eastern Socialists on November 3, 2018