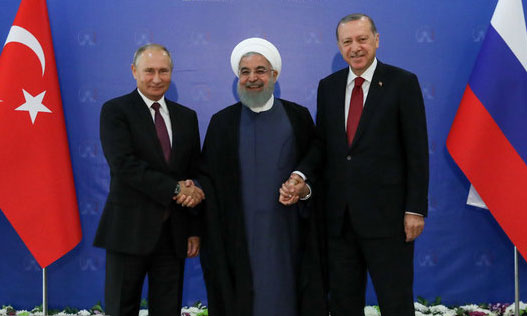 After the summit held by  Rouhani, Putin and Erdogan in Tehran on September 7,  Iran launched an assault on the Kurds in Iran and Iraq.    Russia and Syria intensified their assaults on Idlib.   Later,  Putin and Erdogan met in Sochi, and  reached a comprehensive  agreement that was also  officially approved by Syria and Iran,  and warns of an ominous future for progressive struggles  in the whole Middle East region.

The Ramifications of the Tehran Summit

On September 8, after the Tehran summit,   the Iranian government executed three Kurdish political prisoners,  Ramin Hossein Panahi,  Zaniar Moradi and Loghman Moradi.  On the same day,  the Islamic Revolutionary Guard Corps shot missiles at the headquarters and training camp of the Kurdish Democratic Party of Iraq and the  Kurdish Democratic Party of Iran (based in Iraqi Kurdistan).  As a result of these missile strikes,  14 people were killed and 30 were injured.  Then on Monday, the Iranian state executed a Kurdish political prisoner,  Kamal Ahmadnejad in Miandoab,  Iran.

A day after the September 7 summit,  Russian and Syrian jets resumed intensive air strikes on Idlib and Hama.  Again, they dropped barrel bombs on innocent civilians and bombed clinics in  the name of a war against terror.   Iran has also been one of the perpetrators of these crimes with its military and financial support for the Assad regime and with the presence of the IRGC and its militias in Syria.

Turkey was opposed to the assault on Idlib because it is not ready to admit millions of Syrian refugees to whom it has closed its borders since 2016.  Turkey also uses the armed groups under its control in Idlib to attack the Kurds.

In order to reach a deal,  Erdogan and Putin had another meeting on September 17 in the Russian city of Sochi.  There, they came to an agreement which they made public after gaining the approval of  Iran and Syria.    Putin and Erdogan announced that a “demilitarized zone” (15-20 kilometer area) would be set in northern Syria as a buffer zone between the area controlled by the Assad regime and the area controlled by armed forces supported by Turkey.  This zone would be controlled by Turkey and Russia.   Tahrir al-Sham (Al Qaida) would be pushed out of the region.  However, other religious fundamentalist and opposition armed groups under Turkish control would remain there and would keep their arms.

Turkey aims to maintain its influence in territories already under its control.   On the one hand it aims to intensify its attack on the Kurds.   On the other hand, it wants to replace the Kurds in northern Syria with Arabs fleeing the Assad regime,  or at least change the demographic composition of northern Syria.

Idlib has a population of three million, half of whom are refugees who have fled other regions of Syria after the Assad regime’s deadly assaults and sieges.   Although the Jihadist Tahrir al-Sham (with over 10,000 fighters) and other religious fundamentalist groups such as Ahrar al-Sham which are supported by Turkey,   control Idlib,  the majority of the population of Idlib have expressed their opposition to Jihadist and Salafist groups.  The majority are democratic opponents of Assad and are under attack both by his regime and by religious fundamentalists.

In the popular protests that took place in the first two weeks of September throughout Idlib and were repeated on September 22,  the presence of civilians and those independent of Tahrir al-Sham and Ahrar al-Sham was much more prominent than the supporters of religious fundamentalist groups.   In the city of Maarrat al-Nu’man, over 25,000  people gathered and chanted:  “We want to tell the world that we are just an oppressed people who want freedom.”  “Our goal is to overthrow the Assad regime and end the Russia assaults.”  “This is a popular revolution and not terrorism.”

Although Erdogan claims to be a supporter of the Syrian people and an opponent of Assad,   and has thus been able to gain much support among Idlib’s population,  Erdogan’s goal is not to oppose Assad’s murderous regime.  Rather, he aims to  keep the Syrian refugees in the “demilitarized zone” and to use many  of them to attack the Kurds in northern Syria.

The governments of Turkey, Syria, Iran and Russia all agree on their opposition to Kurdish self-determination.  Even on some occasions where there has been military and political collaboration between the Kurdish Democratic Union Party (PYD) and Russia, Russia has simply aimed to use the Kurds for its own aims.

The U.S. has been neither interested in overthrowing the Assad regime nor in military intervention to help innocent civilians.  Recently, the U.S. cut off its aid to non-governmental organizations for reconstruction in Syria.  It is simply interested in fighting ISIS and reducing Iran’s influence.  According to the latest issue of Foreign Policy, the U.S. does not only welcome Russia and Turkey’s Idlib pact:    “ If Putin,  Assad and Iran want to find a way to manage Syria,  so much the better.  If the Israelis can find a way to work with the Russians,  so much the better also.”   (Michael Hirsch. “How Putin’s Syrian War Is Humbling Trump.”  Foreign Policy,  Sept. 18, 2018).

Responsibilities of  Iranian Progressives and Socialists

We need to emphasize that military assaults on innocent civilians by the Assad regime and by all the regional and global powers, are themselves a form of terrorism.    These terrorist acts have also contributed to the growth of Shi’a and Sunni Jihadist/terrorist forces.

We need to oppose Iran and Russia’s military intervention  in support of the Assad regime, as well as the imperialist  intervention of all regional and global  powers in Syria and  the region.

We need to make a distinction between innocent civilians and Jihadist forces in Idlib and defend the struggles of progressive and democratic Syrians against the Assad regime and against religious fundamentalist forces.

Let’s create links between solidarity with the Kurdish struggle for self-determination and solidarity with the struggles of democratic and progressive activists in Idlib and elsewhere against the Assad regime, Jihadists and other religious fundamentalist forces.

We need to expose the inseparable link between capitalism and militarism.

This article was originally published in Persian by Akhbar-rooz on September 23, 2018.

For a more in-depth discussion,  see my review of Rohini Hensman’s Indefensible: