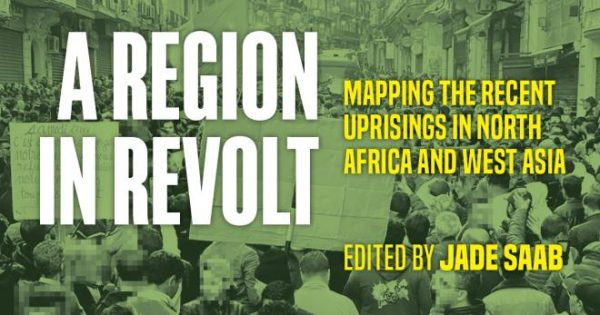 To order the book as a print copy or PDF,  please click on the Daraja Press link below:

A wave of mass protest movements has spread across North Africa and West Asia, including Sudan, Algeria, Iraq, Lebanon and Iran. The mass protests have much in common, from opposing authoritarian regimes and worsening economic situations to demanding radical changes in social relations. Despite their similarities, each protest movement operates under different conditions that cannot be ignored. The specific historic, political and economic contexts of each country have determined who the key actors of the uprisings are and their location across old and new divides. This book elaborates on these similarities and differences to paint a clearer picture of these movements and draw out lessons to inform future struggles.

Edited by Jade Saab, a Lebanese/Canadian Researcher at the University of Glasgow, the contributors include Azza Mustafa and Sara Abbas (on Sudan); Hamza Hamouchene and Selma Oumari (on Algeria); Zeidon Alkinani (on Iraq); Jade Saab and Joey Ayoub (on Lebanon); and Frieda Afary (on Iran).

Insightful, timely analysis of the uprisings in Sudan, Algeria, Lebanon, Iraq and Iran. The book  … demonstrates that the uprisings…carry the unyielding spirit of people’s resistance and struggle against both imperialism and local oppressive regimes.— Haifa Zangana, Iraqi novelist, author, artist, and political activist and author of Dreaming of Baghdad.

Whereas there is a plethora of books on the 2011 [Arab Spring] upsurge, this book is the only comprehensive overview of the second wave of revolt, which is here analysed from the standpoint of the popular struggle. —Gilbert Achcar, Professor at SOAS, University of London, author of The People Want: A Radical Exploration of the Arab Uprising

A rich and informed account of the popular uprisings that have emerged across the Middle East in recent years. … [T]his book is a powerful testament to the new generation of activists who continue to seek long-term revolutionary change in the region. Adam Hanieh, author of Money, Markets, and Monarchies: The Gulf Cooperation Council and the Political Economy of the Contemporary Middle East (CUP 2018).

To view the book launch or only listen to it, click on one of these links:

For the link,  go to facebook.com/darajapress

Jade Saab (on Lebanon): Lebanese/Canadian writer and activist and editor of A Region in Revolt

Frieda Afary (on Iran). Librarian, translator, producer of Iranian Progressives in Translation and cofounder of the Alliance of Middle Eastern and North African Socialists

A Region in Revolt captures all of the hope and inspiration of the 2019 uprisings. One of the most significant achievements of these movements is that, in the words of Hamouchene and Oumari, ‘people discovered their political will and realised they are in control of their own destiny.’ These were undeniably class revolts, fueled by anger over poverty, unemployment, austerity, and corruption. Yet, the people in the streets largely imagined themselves as citizens. The challenges of how to bring people into motion as workers, how to develop independent working-class organizations, and how to develop a political alternative to capitalism continue to be pressing. The COVID-19 pandemic has thrown another obstacle in the way. But there is no doubt that future struggles are on the horizon. A Region in Revolt helps us answer the question of what we can do now to prepare for them. —Emma Wilde Botta is socialist activist and writer based in Oakland, California. She has written extensively on the Arab Spring, the Gulf States, Iran, and US imperialism. Her writing has appeared in TruthOut, the International Socialist Review, roape.net and Socialist Worker.

United we stand: anatomy of five revolutions: Mike Phipps reviews A Region in revolt: Mapping the recent uprisings in North Africa and West Asia, edited by Jade Saab, published by Daraja Press (Ottawa) & TNI (Amsterdam): We are nearly ten years on from the Arab Spring, a series of uprisings across the Middle East. When it began, argues Jade Saab in this important new book, it “was presented to the world through an orientalist lens… the awakening of the backwards Arab world.” For the west, it provided retroactive justification for the invasion of Iraq: “All democracy in the region needed was a nudge in the form of an illegal invasion and a million dead civilians.” This narrative allowed reactionary regimes in the region to paint the uprisings as western plots to destabilise their countries. Both these interpretations were bolstered by military interventions in Libya, Syria and Yemen. These military interventions upped the stakes considerably for any nascent popular uprising. If movements called for the fall of the regime, the regime could respond: “Do you want to become another Syria?” Yet the uprisings continued, and it is not too hyperbolic to refer to the last couple of years as a Second Arab Spring. This second wave is the focus of this book. The demands raised by these uprisings go beyond a change of political leadership: they call for a fundamental restructuring of society. The countries in question share similar political economies with an emphasis on extractivism and speculative investment. The spoils of these activities bypass ordinary people, fuelling the migration of skilled labour out of the region and massive rates of unemployment, especially among young people. They also share a common problem: “Debilitating national debt means that foreign finance has a vested interest in maintaining ‘stability’ in the region.” So unlike during the 2011 Arab Spring, “Western nations have refused to withdraw support from the various ruling classes in the region even though the intensity of protests has reached similar levels.” …

A Region in Revolt Edited by Jade Saab, Daraja Press If you’ve enjoyed [RED PEPPER’s] analysis of the ‘second wave’ of uprisings across some of North Africa and West Asia, then this book is a timely exploration of ground uncovered. Looking across Algeria, Sudan, Lebanon, Iran and Iraq, this collection of essays draws out the similarities and differences of the movements that are demanding radical social change under authoritarian regimes. One of the few books to explore the second wave of revolt, it is a fitting testament to a new generation of activists and their ongoing struggle for revolutionary change. RED PEPPER Winter 2020.ISBN Print: 978-1-988832-61-6ISBN eBook: 978-1-9888326-2-3Publication Date: September 2020Page Count: 178Binding Type: Soft coverTrim Size: 6in x 9inLanguage: EnglishColour: B&WFor retail trade, library, university and college bookstores in North America, please contact [email protected] For all other enquiries, contact [email protected]

To order the book as a print copy or PDF,  please click on the Daraja Press link below: