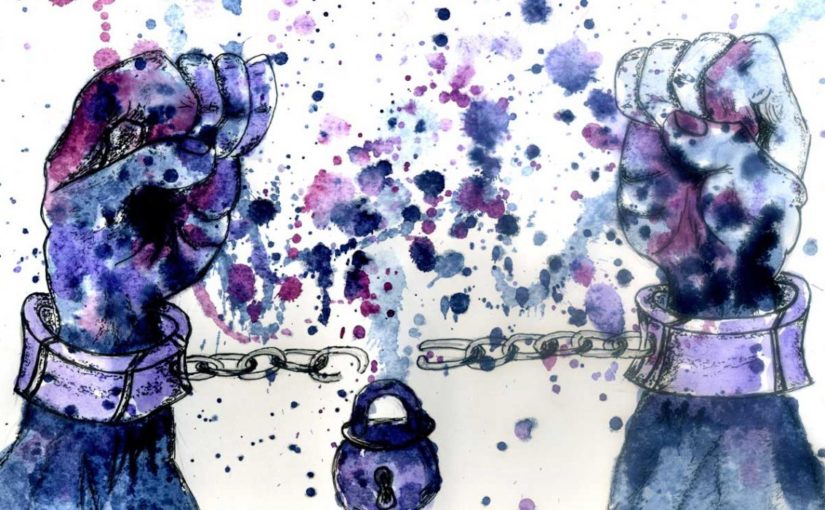 In Iran, the prison population is approximately 240,000, with no accurate count of political prisoners. The Iranian government’s effort to cover up the spread of the virus until late February   has led to Iran’s population suffering the highest coronavirus death toll in the MENA region so far. There are currently reports of riots in prisons in Tabriz, Azarbaijan, Saqez, Kurdistan, Ahvaz, Khuzestan, Hamedan, as well as a hunger strike of 200 women prisoners in Urmia …

BY FRIEDA AFARY AND LARA AL-KATEB

The COVID-19 pandemic has given new urgency to the need to abolish prisons, refugee camps and the inhuman capitalist carceral system.  Prisoner and refugee populations are facing an imminent death sentence from the fast spread of the virus in the crowded and unsanitary conditions of prisons and camps.

During the past week, there have been protests inside some detention centers and prisons in the US, Iran, Italy and elsewhere.  Prison abolitionist and refugee and immigrant support groups in the US are calling for “a thorough plan to release people from jails, prisons, and detention centers.” Although, the US and several other counties have started to release limited portions of their prison populations, it is way too small to prevent the spread of COVID-19.

On a global scale, the U.S, China and Russia have the highest numbers of prisoners and hold half of the world’s prison population of nine million. Brazil, India, Mexico, and South Africa also have large prison populations.

The US prison population is estimated at around 2.3 million people, with approximately 540,000 detailed because they cannot pay cash bail. The “War on Drugs” targeted African-Americans, resulting in a Black incarceration rate five times that of whites. Today U.S prisons are incubators of disease, where overcrowding, unsanitary conditions and the lack of medical care and medical staff  leave many prisoners vulnerable to the coronavirus.

In China, over 1.5 million people are currently detained and more than half are political prisoners, the majority of who are ethnic minority Uighurs held in re-education camps in Xinjiang province. By late February, over 500 cases of COVID-19 were reported across five Chinese penitentiaries, and many more are unreported or covered up.

Russia has an estimated prisoner population of 874000. Police forces arbitrarily arrest protesters, including university students and children. At least half a million prisoners in Russia do not have access to hygiene and sanitation protections against the coronavirus.

In the Middle East and North Africa region, Syria has the highest number of political prisoners with roughly 100,000 people. A letter signed by 43 human rights groups calls for the immediate release of all prisoners from detention centers and jails and prisons inside Syria.

Turkey has between 200,000 and 300,000 prisoners. According to Human Rights Watch, it is the world’s leader jailer of journalists. Many activists have also been prosecuted for their social media posts.  There are currently 49,000 political prisoners in Turkey.  Recently,  Turkish officials have agreed to release ⅓ of the incarcerated population in face of the COVID-19 pandemic. However, journalists, Kurdish militants and political activists will be excluded from the measure. Since social distancing is not possible in prison cells, this puts thousands of people at risk of infection.

In Iran, the prison population is approximately 240,000, with no accurate count of political prisoners. The Iranian government’s effort to cover up the spread of the virus until late February   has led to Iran’s population suffering the highest coronavirus death toll in the MENA region so far. There are currently reports of riots in prisons in Tabriz, Azarbaijan, Saqez, Kurdistan, Ahvaz, Khuzestan, Hamedan, as well as a hunger strike of 200 women prisoners in Urmia, all demanding furlough to be saved from COVID-19. The Iranian government claims that it has temporarily release 85,000 prisoners in face of the pandemic. Very few among them are political prisoners.

In Israel, there are over 19,000 imprisoned people, of who over 4500 are Palestinians.  Palestinian prisoners have been cut off from any contact with family or lawyers since the imposition of emergency regulations to combat COVID-19.  In protest over medical negligence, Palestinian prisoners are refusing the meals provided to them by the prison authorities.

The number of people in refugee camps, another form of prison, is the highest since World War II.   Of the 70 million forcibly displaced  people around the world, 25.9 million are refugees and over half are children.  Two-thirds of refugees come from just five countries: Syria, Afghanistan, South Sudan, Myanmar and Somalia. The situation of Syrian refugees in Idlib, and in other camps camps in the region  is atrocious. A refugee camp in Lesbos, Greece intended to house 3000 people is now holding 23,000 refugees.  Several aid groups warn of catastrophic consequences for refugees without access to testing, medical facilities and running water.

In South Sudan, there are more than 1.6 million internally displaced people. According to the  International Committee of the Red Cross (ICRC) in Nairobi, it takes days for adequate healthcare to reach people for treatable diseases like malaria or diarrhea which sometimes end in fatalities. So far, no confirmed coronavirus cases have been reported in South Sudan. However, contagion in such densely-populated areas could devastate an already fragile healthcare system. Scarcity and lack of beds in two major refugee camps in Southeast Africa which hold around 418,000 refugees and  asylum seekers puts thousands of lives at jeopardy.

In the US, there are 37,000 undocumented immigrants in Immigration and Customs Enforcement (ICE) detention centers. At least 7000 children of migrants are being held either in various group homes away from their parents or in detention centers with their parents. Tens of thousands of rejected asylum seekers are in camps at the US-Mexico border.

In light of these realities, it is clear that the world’s detained and displaced will be disproportionately affected by the pandemic, requiring a global response from prison abolitionists.

Effectively fighting the COVID-19 pandemic demands a global prison abolitionist movement based on opposition to all forms of exploitation and domination.

Until now, the US prison abolitionist movement against mass incarceration and police violence has focused on US prisons, only recently broadening their scope to address the detention of undocumented migrants by ICE. Few connections have been made with activists defending political prisoners in China, Russia, the Middle East, and North Africa; or with those organizing in solidarity with the over 70 million refugees and displaced people in camps around the world.

The COVID-19 pandemic compels us to create a global prison abolitionist movement that addresses the connections between prisons, refugee camps, racism, sexism, imperialism and the inhumanity of the capitalist system.

Opposing the carceral system demands taking a stand against all forms of authoritarianism and oppression internationally. Ruth Wilson Gilmore, author of Golden Gulag (2007) and a leader of the US prison abolitionist organization Critical Resistance, has analyzed both the relationship not only between economic crises and the rise in incarceration in the US; and the role of prisons as an instrument of social control to legitimate the power of the capitalist state globally. In a speech to a recent gathering of Critical Resistance in Los Angeles, she emphasized that “reforms will not end prisons. Abolitionism has to be Green, Red, and Internationalist.”

WHAT IS HOLDING US BACK?

Erich Fromm, a socialist humanist theorist from the Frankfurt School, has written about the ways in which the carceral and police system displace mass anger from social and economic conditions and toward prisoners.

While this may explain why broad layers of the popular classes acquiesce to the growth of incarceration, what are the factors impeding coordinated efforts among prison abolitionists and socialist solidarity activists on an international scale?  We want to point to four issues:

2.   US prison abolitionists recognize the profoundly racialized character of the US prison population where two thirds of the current prison population of 2.3 million and many of the millions on parole are poor and working class Blacks and Latinos. Middle Eastern and North African activists have also highlighted the repression and incarceration of the Kurdish national minorities in Syria, Turkey, Iran, and Iraq. Unfortunately, the same solidarity is often not extended to the over one million Uighur Muslims in Xinxiang province who are imprisoned in the Chinese government’s forced labor/“re-education” camps.  We also need to extend our solidarity to the Rohingya Muslims in Myanmar and the Black population of Darfur, Sudan or of Brazil.

3.  Although the population of women prisoners around the world (officially 714,000) is smaller than the male prison population, women’s imprisonment is  growing at a much faster rate than men’s imprisonment. While some are political prisoners, the majority are in prison because poverty led to their being trafficked, forced to become sex workers, to use or sell drugs,  or because they defended themselves against or were held responsible for the debts of abusive partners. Transgender prisoners are also facing severe abuse around the world.

4. Finally, there is a tendency among some on the global left to ignore or defend authoritarian rulers who claim to be against US imperialism. This selective anti-imperialism refuses to defend political prisoners in countries such as Syria, Iran, Russia, China, Venezuela, Cuba, Nicaragua even if they oppose all imperialist powers and religious fundamentalism. Of the over 100,000 political prisoners in the brutal Assad regime’s dungeons, the majority are not jihadists – they are youth, Kurdish, labor, and feminist activists who dared to participate in the uprising against the Assad regime in 2011 and after. The millions of Syrian refugees who are being bombed by the Assad regime and their Russia and Iranian allies suffer in refugee camps in the region.

There is a tendency among many on the global left to ignore or defend authoritarian rulers who claim to be against US imperialism. This selective anti-imperialism refuses to defend political prisoners in countries such as Syria, Iran, Russia, China, Venezuela, Cuba, and Nicaragua even if they oppose all imperialist powers and religious fundamentalism.

The COVID-19 pandemic and its genocidal ramifications compels us to address these barriers to solidarity and overcome them in order to create a global movement for abolishing prisons and refugee camps.  Part of our program must point to the need to an alternative to the capitalist system itself, which is carceral and authoritarian whether in its neoliberal form or “statist”  forms.

Fromm,  Erich.  “The State as Educator:  On the Psychology of Criminal Justice”  in Critical Criminology:  Beyond the Punitive State.  Kevin B. Anderson and Richard Quinney, editors.   University of Illinois Press,  2000.

Alexander,  Michelle.  The New Jim Crow:  Mass Incarceration in the Age of Colorblindness.  The New Press, 2012.

Alliance of MENA Socialists.  Campaign in Solidarity with Feminist Political Prisoners in the Middle East

This article was originally pubilshed by Spectre on April 3, 2020

Greek Translation of What Is Holding Back the Formation of a Global Prison Abolitionist Movement to Fight COVID-19 and Capitalism?